When you think of things that go hand in hand; salt and pepper, cheese and crackers etc. having beers and watching sport is pretty high up most guys lists! So here's my idea, why not combine the two activities into some sort of game for my amusement?

I will use the countries that have qualified for the tournament in Poland and Ukraine and literally play a beer off against a beer from the opposing country. Each beer will get a mark out of 10 which will be transposed as a more realistic soccer scoreline, in a system that is still under construction. After the group stage the tournament will follow whatever path the beers take us. It should be a fun journey!

THE GROUPS
These are the competing countries, hence I need to find at least 3 beers from each of these countries. This may prove difficult as I still haven't found a Ukrainian beer for my European Challenge (Anton is currently working on this.) Some of these countries, Croatia for example, have only one or two beers imported to Australia, so for a point of difference I will buy them from different stores. 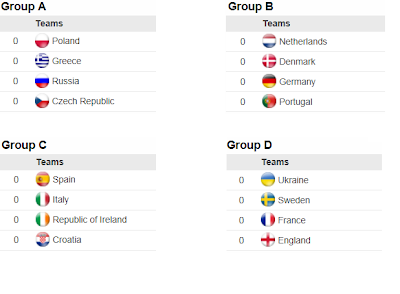 Basically thats all you need to know for now (mostly because this is about as far as the idea has come in my head!) Suggestions would be more than welcome if you would like a particular beer to represent your country, if I can get my hands on some in the next month.﻿
Remember it's always Beer O'Clock somewhere in the world!
﻿
Posted by Noz at 04:13

Email ThisBlogThis!Share to TwitterShare to FacebookShare to Pinterest
Labels: EURO 2012