REVIEW: HALF A WORLD AWAY

This is the first proper review I've done in ages! But it's a great beer to come back on; the Nøgne Ø/Holgate collaboration Half a World Away. The beer is the result of the brewer swap that these two breweries did earlier in the year.

Holgate sent one of their brewers, Nick, to Nøgne Ø in exchange for Ingrid. Basically they swapped lives for a few months and part of their job was to come up with a collaboration beer with what they both learnt. Half a World Away is the result, an Imperial Amber/Red Ale and I can't wait to try it! With what these two breweries have been pumping out recently it's not going to be bad!

The pour is a very bright red colour, even if the photo doesn't quite show it. The Holgate and Nøgne Ø collaboration has only a smallish tan coloured head, although the retention is excellent and there is some lacing despite the small size of the head. It's a really impressive looking beer, one of the best looking amber ales that I've seen for a very long time.

For such a high ABV alcohol amber ale (say that 5 times fast!) I was expecting alot more in the way of an alcohol element to the nose, but I can happily report there was none. The majority of the nose is made up of medium bodied malts with some fruit flavours and earthy hops also present. It's a nose that I could smell all day long.

Half A World Away is a triumph for the once simple amber ale. Not only does it push the boundaries of the style with it's high ABV, but it still retains many of the qualities that make the style one of the most sessionable going around. It's perfectly balanced with a mix of strong malt flavours while still having enough hop bite to satisfy most craft drinkers. Absolutely love this one!

Overall I was really impressed, once again, by a Holgate seasonal. Recently there seems to be nothing this brewery can't do and Half A World Away was another brilliant example. Right from the first pour when the brilliant ruby liquid bubbled over the edge to the brilliantly balanced flavour; this beer was fantastic from start to finish! It's a beer that everyone should try.

Remember it's always Beer O'Clock somewhere in the world!
Posted by Noz at 02:10 No comments:

OUT OF OFFICE: TOWNSVILLE BREWING CO. 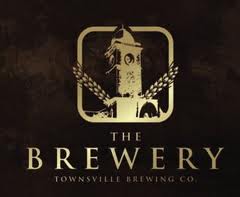 
STATS
For the last couple of weeks I've been flat out organizing our company's push into far north Queensland. It was an incredibly hectic week up there but I did manage to find time to pop into The Brewery in Townsville. Thankfully I did as I had a really good time and it was probably the highlight of my trip.

After a busy afternoon interviewing applicants for our Townsville job vacancy I decided to head down to The Brewery and mull over the candidates over a few beers. The walk from my hotel only took about 10 minutes but in the humid Townsville conditions I was pretty hot and ready for a beer!

Upon arrival I thought I'd get a schooner of something before settling in to have a methodical look at the range. A Digger's Golden Ale was chosen and drunk remarkably quickly while the bartender explained that The Brewery now produces 8 beers year round and conveniently has a tasting paddle and for just $12!

The only natural thing to do was to purchase a tasting paddle and run through the range before settling on any beer for the long haul. Here is a quick run through of the beers from the notes I took on my phone.

Townsville Bitter Light: There was some Saaz bitterness but not enough; A bit light on flavour even for a Light.

Townsville Bitter Premium: The 5% ABV version of this beer had a lot more body and flavour, it was a much better beer.

Bandito Loco: A Mexican style lager in the mold of Dos Equis. Absolutely perfect for the style with plenty of citrus hops.

Belgian Blonde: Was probably the technically best beer. A perfect Witbier nose and taste, although it would have been hard to drink.

Ned's Red Irish Ale: Oddly smokey whilst still creamy. It's got a Kilkenny feel to it, but in a good way! It grew on me by the end.

Flanagan's Dry Irish Stout: The roast was impressive and the nose was excellent. The beer itself was only average.

So for a round up of the Townsville Brewing Co. range: The beers were drinkable across the board without being exceptional. The Bandito Loco was the standout for me, with the drinkability of the Digger's Golden Ale getting it second place. The Ned's Red Irish Ale was the worst for me, just a really hard beer to drink lots of.

After finishing my tasting paddle I had dinner, a huge chicken parma on a bed of chips which was absolutely delicious. Many more schooners, then happy hour pints followed and I stumbled back to my hotel. The beers may not have been exceptional but the overall experience was! A trip to The Brewery is an absolute must if you are visiting Townsville.

Remember it's always Beer O'Clock somewhere in the world!
﻿
Posted by Noz at 03:32 No comments:

STATS
This evening I get to add another beer style to my list that I've reviewed on Beer O'Clock Australia; American Wild Ale. Basically it's a beer which has had "wild" yeast or bacteria (such as Brett) added to give a funky sour flavour.

The very nature of the style dictates that it is very hard to produce a consistent flavour across a number of brews, so each batch can differ greatly. It's a style that splits beer drinkers, you either love them or hate them. I'm about to find out which category I fit into. Trust MoonDog, my local crazy micro brewers, to come up a beer like this. For those who recognise the name but can't quite place it, Mr Mistoffelees is the name of one of the lead characters from the musical Cats.

MoonDog's Mr. Mistoffelees pours more like a cordial than a beer. The colour is an almost luminescent orange colour, which really sparkles in the light. There's plenty of carbonation but it doesn't seem to produce much of a head as the white foam on top of the beer last no more than 30 seconds. I can also notice a few flecks of white sediment that I assume are a by product of the wild yeast addition.

I think I forgot to mention this earlier but Mr Mistoffelees is termed a "Passionfruit & Mango Wild Ale". This certainly becomes apparent when you smell this beer. Huge hits of passionfruit dominate the nose with mango evident underneath. The mango that comes through is quite tart although clearly in the background to the passionfruit. There's the tiniest hint of some Belgian funk, but not a noticeable amount on the nose.

Much like the nose, passionfruit dominates the taste of MoonDog's Mr Mistoffelees. The passionfruit flavour mellows a little as the beer warms and is replaced by a tart, almost acidic, mango flavour. There is plenty of Belgian funk about this beer and at times it has an almost salty flavour to go with the excellent fruit flavour. This certainly isn't the normal beer you'd find in the fruit beer section, but it's one of the best I've had!

What an absolutely fabulous sour beer! I haven't sampled a heap of sours but this is one of my favourite beers full stop! I'm going to buy a couple more to confirm that I wasn't just drunk and in love with it for no reason, but I'm pretty sure it's the real deal. It's definitely my favourite MoonDog beer and a beer I would recommend to all fruit and sour beer drinkers.

Remember it's always Beer O'Clock somewhere in the world!
Posted by Noz at 02:04 No comments: