STATS
My trip to Sydney to support the mighty Blues may have delayed this review a little, but this was a beer worthy of having some time to think it over. It's also mellowed what I was initially going to say, which is probably a good thing.

This is not the only beer named Punk Monk. BrewDog famously brewed a beer of the same name, although it was only a short lived run. Basically it was regular Punk IPA but brewed with Belgian yeast. I never actually sampled the BrewDog version but from all reports it wasn't great. Anyway here's my Murray's Punk Monk review.

Stylistically the pour was close to perfect. The colour of the beer was deep golden with plenty of small bubbles rising to a cream coloured head. The head retention certainly wasn't great but this thankfully didn't effect the lacing, which was excellent. Punk Monk is a very nice looking beer, despite my dirty beer glass... 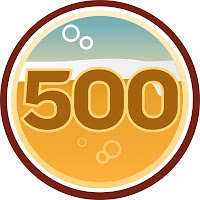 The nose delivers everything that the label promised it would. The beer is a hybrid mix of Saisons, Belgian Blondes and Tripels and the nose indicates this beautifully. There is all the fruit characteristics that you would expect from a blonde with the alcohol and funk that you would expect from a Saison. The subtle addition of some spice as the beer warms is lovely as well!

Murray's Punk Monk didn't disappoint when it came to taste either. It's got everything! The perfect mix of bitter/sour fruit at the back end mixes beautifully with a creamy spiciness up front. The mouthfeel is surprisingly thin given the creamy texture of the beer. I'm describing this terribly; but seriously it's a great Belgian-influenced summer ale.

As I drank this I thought it was one of the best beers I've had this year! Upon reflection this certainly wasn't the case, but it was very good. That said I'm still going to buy some more. For Australian drinkers who aren't huge on Belgian beers this would be a good intro beer if you are looking to get into them. All lovers of beer; you should try this one.

Remember it's always Beer O'Clock somewhere in the world!
Posted by Noz at 22:20