STATS
I have not been very impressed with either of the previous two Brewer's Series releases from Monteith's. I wasn't going to buy until I was someone else walked into Purvis raving about it and expressing similar sentiments to me about the quality of the first two.

So decision made to buy the beer and here we are. I was racking my brains for other examples of apricots in beer that I've and came up with two, St Ambroise Apricot Wheat Ale and an Italian one that I can't remember the name of. I remember both being good so hopefully this one is no different.

The pour is more akin to that of a lager than a Hefeweizen. Its a very clear golden colour with a small 2-3 finger white head. There are numerous small bubbles in the head and it dissipates to a light film that barely covers the surface of the beer. Disappointing to say the least but after the last two from this series I wasn't expecting anything better. Terrible appearance for the style. 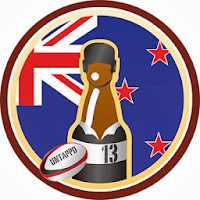 In really positive news for me the nose is significantly better than the appearance; although still not showing wheat beer characteristics. The nose smells very sweet and is mostly made up of a fake apricot smell. Towards the back end of the beer there is some light citrus and banana flavours which could be reminiscent of wheat...

Onto the tasting and initially I thought this was too sweet. However a couple of minutes of warming and some more flavours developed. Thankfully there was wheat in this beer and the banana and extremely light cloves flavour complimented the sweet apricot flavours beautifully. The carbonation and mouthfeel were both spot on for me as well.

Overall I was quite impressed with this beer. I'm not sure how much wheat is in it but if we put that aside it's certainly a very quaffable which would go beautifully with curry (from my experience with what I assume is it's inspiration - the St. Ambroise version). So conlusions, this is the best of the Brewer's Series from Monteith's so far and it's worth a try, it's a nice beer.