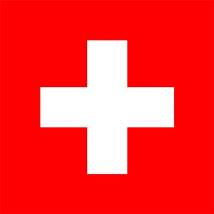 
From Milan we took the train to Geneva in Switzerland. I didn't know what to expect from the Swiss craft beer scene, but I did go armed with the knowledge that they have a craft beer store in the train station.

If you've read my Italy wrap up, you'd be aware I had a pretty big night out on my last night in Milan and so when buying beers was a little under the weather... The shop I visited had a quite a varied range, resulting in the macro lager reviews you've seen over the last week or so, as well as the beers I'm going to review here.

As I was still recovering I didn't get into any of the craft beers on my first night. I did howver brave a Cardinal Speciale with dinner. It was a sweetish lager but on the whole could have been a lot worse. Later that night I followed it up with my first ever Morrocan beer, Casablanca, which you can read about in more detail in the link provided here.

The next day, feeling much better I must add, I sampled Calanda from a can after a hot morning of walking around. Alongside Cardinal and Feldschlossen this is one of the main macro lagers produced in Switzerland. Much like the Cardinal it was a bit sweet, but perfectly drinkable with a light astringency separating it from the pack.

With lunch I had an Ittinger Klosterbrau. It was an Amber Ale/Vienna Lager made by Heineken Switzerland. I found it to be quite enjoyable with good caramel malts. That afternoon we popped over to France and the beautiful village of Annecy. Naturally after a quick tour we had a beer; mine was the Brasseurs Savoyards BS Blonde. It wasn't anything special, but it did go down nicely in the heat.

Back in Geneva I tried the Chopfab Summer, which purported to be a White IPA. I hate to say this; but it wasn't. It was very middle of the road with not enough witbier characteristics nor enough hops to satisfy either element of this beer. I think more of either would have improved it, leaving it like this just left me wondering what might have been...

I had another Cardinal Speciale for dinner, seemingly the only Swiss beer served in Geneva restaurants - before jumping into Club Colombia, find that review here. La Nebuleuse made quite an impression on me with their Stirling, which they termed a California Common. It was definitely an American Pale Ale however, with great citrus hops and a lovely malt base. I enjoyed it so much that I went and bought another few of their beers, although that's a story for another day...

Ticino Brewery Company's Bad Attitude Hobo was the last beer of the day. I was not at all impressed with it! It was very malty and lacking in hops. I don't know if this was an old bottle, but if it was fresh stock it was a gross misunderstanding of the term IPA.

Switzerland's main lager is Feldschlossen Original. I sampled a can of it on our last day in Switzerland - a day Lizzie and I split many lagers! This one was perfectly acceptable. It wasn't too sweet, and had enough hops to keep me interested but not too much to put Lizzie off.,,

We went to this restaurant that only serves chicken for lunch, Chez ma Cousine - also one of the cheapest places to eat in Geneva. I have a Calvinus Blonde Bio. It was a Blonde Ale that had nice yeast characters and citrus flavours, but I thought a little hop bitterness could have added to it... For dinner I had a Calanda off tap, which was more inline with the canned Feldschlossen with a lot less abject sweetness and an almost bitter hop finish.

Docteur Gab's Houleuse was my favourite beer that I had in Switzerland. It was an impressive Witbier, packed full of coriander with this intriguing slightly sour finish that left me wanting more and more. I'm assuming the sourness was intentional, because I loved it, it seemed too perfect to be an infection, but I've been wrong in the past...

That night I tried three more lagers of the world, two of which were reviewed for your enjoyment. The first was Chinggis, named after Genghis Khan, from Mongolia. The second, which wasn't reviewed was Crocodile from Sweden which I found far too sweet. Finally Polar Pilsener a Venezuelan lager with a nice hoppy finish, which you can read more about here.

Last but not least I couldn't not try a German IPA when I saw it. Riedenburger Dolden Sud was the beer and it had quite interesting hops with restrained bitterness. The hop flavour through me a little, with my brain unable to decide if the fruitiness was apricot or melon. I did quite like it though, as it was quite different to most of the IPA's we get at home.

I didn't manage to get through all the Swiss beer; I saved some of it for Liechtenstein, where I assumed my craft beer options would be restricted. Before catching our train from Geneva I popped back into Drinks of the World to grab a couple of reinforcement beers, with no idea on what my options would be like in or around Vaduz.