STATS
I've been particularly excited about this beer ever since I picked it up a week or two ago. It's a Black IPA brewed in collaboration between two Russian breweries, which has had loads of Black Currants added to it.

Just after I said the other day that 2 badges in one check-in was becoming a rare occurrence; it happened again. Here we have a collaborative effort from Stamm Beer and AF Brew, both Russian breweries and once again courtesy of Anton at Tru Bru. Naturally this beer unlocked both Tovarisch (Level 2), for drinking Russian beers, and Better Together (Level 6), for drinking collaborative brews. Anyway onto the beer. 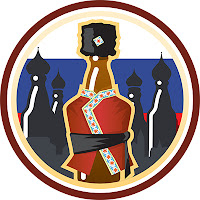 As expected, this beer pours a lovely dark colour with a big active head. At first the cream coloured head looked wonderful and tight, but in the time it took me to take the photo it developed a number of large bubbles and reduced considerably in size until it was no more than a rim around the edge of the glass. The colour of the beer was really interesting, with it appearing black from a distance, but a very deep red/brown up close.

Onto the nose and an unmistakably dark fruit is the dominant aroma. I can't say for certain it's black currant, but I'd hazard a guess that it is... There is only light roastiness on the nose, which is a little unusual for the style, but the hops seem to deliver on bitterness. I can't wait to see what this beer tastes like! The beer tastes sensational! There is some roast, but it's no where near as prominent as you'd expect from a Black IPA. Instead the dominant flavours are of the dark fruit, probably Black Currant, and the hops, which provide excellent bitterness to go along with a bit of tartness from the fruit.

Stamm Beer and AF Brew have produced a really nice beer. It's not the most traditional example of a Black IPA that you'll ever see, but the addition of Black Currant was a masterstroke. I'd be very keen to get my hands on a few more beers from these guys (I'm pretty sure I've got a few more Stamm ones in the fridge...)

Remember it's always Beer O'Clock somewhere in the world!
Posted by Noz at 20:05