STATS
This is the second of the four Knee Deep beers that hit our shores in February (there are more on the way!) that I've reviewed in full for you. Hoparillo is billed as a Triple IPA, packed with Citra, Mosaic and Amarillo hops. It comes in at 122 IBU's and I can't wait to wrap my lips around it.

Sky's the Limit is not a badge that comes around all that often, so I will forgive any of you who aren't sure of what it's for. It's for drinking beers with an ABV of 10% and above. Knee Deep's Hoparillo certainly fits that category with an ABV of 11.1%.

Knee Deep's Hoparillo pours brilliantly! The beer is a crystal clear, deep golden colour with a thick, large white head perched atop. The head is thick, with very very few air bubbles - which in turn leads to wonderful head retention and lacing of the glass. It's almost a mirror image of their Simtra Triple IPA, that I reviewed back in March. 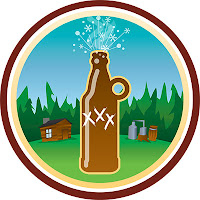 As expected the nose is packed full of hops. It's got all the characteristics you would expect; pine resin, plenty of citrus - particularly grapefruit and orange - and tropical fruits. The malts are surprisingly present for the style, with sweet grain managing to cut through the big hop aromas.

Hoparillo tasted superb! It was wonderfully bitter, with resinous pine and grapefruit flavours the most dominant. The malts that were present on the nose, were present but much more in the background and the sweetness was not a factor. The mouthfeel of this beer was superb and greatly contributed to how easily it drank.

In my mind, this is on par with the Simtra as the equal-second best beer from Knee Deep that came out in the first batch. It's wonderfully bitter and dangerously drinkable for 11.1% ABV. If you love hops, don't baulk at the price tag! These beers have been looked over on the way over and are as fresh and hoppy as you are going to find! Some more beers from these guys are being launched the Friday before GBW at Alehouse, so if you're in the area check it out.

Remember it's always Beer O'Clock somewhere in the world!
Posted by Noz at 05:00