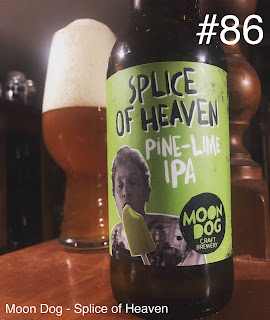 
Part 2 of the Hottest 100 segment is upon us. I've tried at least 1 beer from each decade, for a second time, and have written short summations for you below. Assuming things go to plan, ie. I can find all the beers in time, I intend to complete this challenge in 10 posts. This post has been a little bit delayed by Good Beer Week, hope you enjoy!

#8 - 4 Pines Kolsch The honour of the longest Instagram post I've written to date, belongs to the Brookvale based brewery. It's a spritzy little ale, based on a German Kölsch which has nicely balanced flavours of cereal, floral hops and citrus. It's certainly better than what I'd heard it would be, but top 10 material? I'm not so sure...

#11 - Pirate Life Throwback IPA Due to my recent medication issues, I've become very familiar with this beer. It's far and away the best Australian mid-strength that I've tried. It's got the citrus and bitterness of a full strength IPA, just with a slightly thinner body and wonderful dry finish. I could drink these all day! They're also very reasonably priced, from memory my last slab set me back sub $70.

#22 - Boatrocker Ramjet Ramjet has very quickly rivaled Nail's Clout Stout for most hyped stout in the country. I have to say the hype is justified - and there's a reason why I have a few aging away in my cellar. After sampling Boatrocker's Roger Ramjet's Breakfast, a coffee infused version of the Roger Ramjet {the bourbon barrel aged version of Ramjet}, at the Boatrocker Rarities event at Carwyn Cellars I had to try the original again. Damn it was good! It's so silky smooth, there's slight hints of warming booze to accompany the vanilla, oakiness and chocolate. I don't think you can call yourself an Australian stout lover if you haven't tried this beer.

#36 - Rocks Brewing The Hangman This beer is one I'm familiar with. I've had it a few times, including at the source and it's never blown me away. That said it's a serviceable Pale Ale with nice, if understated, tropical fruit, pine and grapefruit flavours from the hops intertwining with the plentiful malts. I've always thought this beer to be a little on the sweet side and today's tasting did nothing to change my opinion, as it was a little cloying by the end. I can see the appeal to macro drinkers, but I wouldn't have it anywhere near as high as #36 on my list...

#49 - Murray's Fred Murray's Brewery is located in Bob's Farm, one of the best suburb names in Australia (for those wondering, it's up near Newcastle.) It was a really tasty American West Coast IPA with pine the dominant flavour from the hops. Citrus and tropical fruits are also there, whilst the caramel malt base provides good balance. I rate this very highly, I'd have it in the calculations for a Top 10 IPA in Australia spot, I clearly don't drink it enough!

#54 - Feral Watermelon Warhead I honestly think that this beer has the potential to be one of the defining beers in the evolution of the Australian craft beer scene. If/when Feral work out how to package this beautiful little Berliner Weiss in bottles, or preferably cans, I think it will bring sours into the mainstream Australian drinkers repertoire. It's an incredibly refreshing beer with tart watermelon and lactic acid the dominant features. I had this at Boilermaker House during Good Beer Week - and can't wait for the day I can sample it on Australia Day in the scorching sun!

#68 - Six String Dark Red IPA I first had this beer just over a year ago and I've been captivated ever since! It's wonderfully malty at first, with earthiness and nuttiness coming to the fore, before citrus, particularly grapefruit comes through. At 51 IBU's I think it could be a touch more bitter, but overall it's a wonderfully balanced beer. Further distribution this year will see this beer fly up the countdown next year, for those of you who haven't tried it yet - find some!

#75 - Colonial Draught This was the first Colonial Brewing Company beer I've ever had, they've only recently (mid last year, I think) been packaged and made their way over to this side of the country. It's the second beer in this part of the Hottest 100 that is based on a Kölsch. For my palate this beer is a little light on. There's a little citrus zing, some bready grain and a nice crisp finish - although that's about it. The white can is quite striking and I can quite easily see a few of these going down nicely on a warm afternoon.

#86 - Moon Dog Splice of Heaven Over the years I been a staunch advocate that the good Moon Dog produces outweighs the bad. This may be slightly different to popular opinion, but in my mind this beer justifies my position. Last year this beer won the Best Australian Draught beer award in my Golden Pints. It's wonderfully creamy, slightly less so out of the bottle, but packs this wonderful lime flavour - that tastes uncannily like a Splice ice cream. It's a beer I wouldn't hesitate to recommend to people.

#91 - Newstead - 3 Quarter Time The second very tasty mid-strength beer in this Hottest 100 post came in the form of Newstead Brewing Co.'s 3 Quarter Time Session Ale. It was particularly impressive as the body seemed fuller than that of your average mid-strength beer and, if not for the menu stating it, you'd have no idea that it was only 3.4% ABV. Citrus, stonefruit and melon flavours were all present, whilst there were enough hops to leave a nice dry and slightly bitter finish.

So guys, I hope you all survived Good Beer Week and enjoyed this post. I've already got a start on the next decade of beers for you. You can follow me along live on the Beeroclockau Instagram page. There will be a big Untappd wrap up of Good Beer Week, and the following week, in the next couple of days - and there may even be a Macro Lager if things go to plan. Until next time guys, keep enjoying good beers!

Remember it's always Beer O'Clock somewhere in the world!
Posted by Noz at 22:39