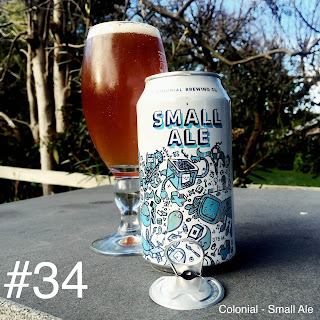 
It's taken me a little longer than expected, but I've finally put together Part 4 of this Hottest 100 segment. I've tried at least 1 beer from each decade (yes, it's correct - it's not just used for years.) and have written short summations for you below. Assuming things go to plan, ie. I can find all the beers in time, I intend to complete this challenge in 10 posts.

#9 - Modus Operandi Former Tenant Former Tenant is named after the "Former Tenant" of the brewery. He was an interesting character to say the least; and was particularly unfortunate to get apprehended when he did. If you want the full story, you'll have to check out my Instagram post on this beer; I think it's worth the read. The beer is particularly dank, with tropical fruit also playing a part alongside the superb caramel malts. This is as good as Red IPA gets and a worthy recipient of a top 10 placing in the Hottest 100!

#12 - James Squire Hop Thief 7 For all the bad press James Squire receives; their Hop Thief is probably the beer that is educating the most Australian beer drinking about craft beer. It may not pack the hop punch of almost any proper craft Pale Ale, but it does have reasonable flavours and showcases different hops with each edition. The seventh edition had Galaxy & Mosaic, there was some tropical fruit notes but this was lost under the malts. For me; either the hops had to be stronger or the malts less intense. For the average drinker? This could be the stepping stone to trying something else...

#25 - Prancing Pony India Red Ale If the Modus Operandi Former Tenant is as good as Red IPA gets, then Prancing Pony's India Red Ale is a very close second! The malt caramelisation is as good as in any beer I can recall, which the hops provide a wonderful range of flavours; with peach, apricot, passionfruit and a strange herbaceous quality all easily identifiable. This beer would be a strong contender for my desert island beer... I reviewed this beer in full at the start of last year; which you can check out here.

#34 - Colonial Small Ale This was a phenomenal little mid-strength! The citrus hops are punchy, while there is a reasonable amount of malt considering the ABV. The best part of this beer however is not the beer itself; it's the packaging! Instead of the little pull tab system, the entire top of the can comes out leaving a huge hole for you to drink out of - much like a glass. It's really cool and not something I'd seen before - it's as good of a reason to purchase a Colonial Small Ale.

#47 - Little Creatures IPA I've loved this beer since it first came out, however the sample I tried for this challenge was really disappointing. The bottle was relatively fresh, yet it was lacking the hop bite of previous version. The malt seemed a little less chewy than past iterations as well. I hope this was just a bad batch, something I wouldn't normally associate with Little Creatures, rather than a Lion forced downturn in quality.

#51 - Mountain Goat Fancy Pants I have loved this beer since it was first released in 2010. It was one of the first beers I had back in Melbourne after my European sojourn that inspired my love of beer. It's a nicely hopped Red Ale, which has plenty of caramel malt layers. There's also some hops, but not enough to excite my palate as much as they would've 5 or more years ago. This beer being available year round now is such good news! I love this beer!

#63 - Big Shed F-Yeah Big Shed is a brewery that I think we will be seeing a lot more of in the not too distant future. They're from Adelaide and continually improving their excellent range of beers, 3 of which made the cut for this years Hottest 100. F-Yeah is well balanced American Pale Ale with biscuity dominating the malt front. There's a light amount of spiciness, which I keep wondering if it's rye - but think it's not, while the hops provide mostly citrus characteristics. If you are after a Pale Ale you can do a lot worse than pickup this beauty from S.A.

#77 - Mornington IPA I can't for the life of me explain why it's been the best part of a year since I last sampled this beer. It's an excellent Australian IPA; which has heaps of stone fruit flavours and some pine bitterness. The malts are mostly biscuity although there is also some caramel malts present. As far as balance IPA's goes, this is as good as they come in Australia.

#83 - Thirsty Crow Vanilla Milk Stout One of my favourite Australian beers slotted in at #83. If Thirsty Crow was based in Melbourne, Sydney or Brisbane (instead of Wagga Wagga) this beer would be in the top 10 every year, without a shadow of a doubt! It's a luscious Milk Stout, with chocolate, roast, vanilla and lactose sweetness combining beautifully. Having this beer in their Brewpub in Wagga Wagga is one of the great Australian beer experiences, something I managed to experience, for the third time, on the way to Grandma's 90th in Canberra.

#94 - Hargreaves Hill ESB Regular readers will be aware that ESB's aren't really my thing. That is slowly changing, in part due to this fantastic beer from Hargreaves Hill. It's definitely not a traditional ESB, as it's been hopped with plenty of "New World" hops. There's this lovely orange flavour I get every time I try it that reminds me of marmalade, while there is also some passionfruit. There's a traditional ESB malt base with some nice earthy and fruity notes. It's a lovely beer, and one that too often gets passed over due to it's plain label.

It may have taken a little over 2 weeks to get this up, but Part 4 of The Hottest 100 Beers is done. I'm starting to run into some availability issues early than expected - so I've made a list and will be being more organised from now on. I'm aiming to get Parts 5, 6 & 7 done by the end of October, which would leave near enough to one month for each of the remaining three parts. You can follow me along live on the Beeroclockau Instagram page. Until next time...

Remember it's always Beer O'Clock somewhere in the world!
Posted by Noz at 04:14