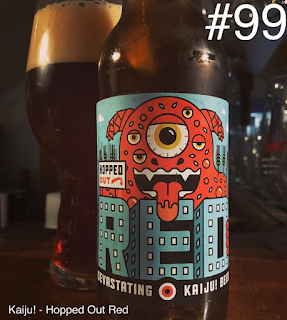 #14 - Brewcult Milk and Two Sugars Brewcult's owner and head brewer is known as a bit of a mad man. Some of his offerings are really out there and very rarely lack flavour! Milk and Two Sugars was his 2015 GABS offering; it also happened to win the GABS People's Choice award. It's held up remarkably well considering it's about 18 months old at the time of trying. If you want to know more about this beer click here.

#23 - Lord Nelson Three Sheets I'm not quite sure how this beer managed to slot in so high in the countdown. It's quite a sweet Pale Ale, with bready malts dominating. The hops are restrained bitterness wise, but do provide some citrus and floral notes. I suppose it's reasonably well made, and admittedly I enjoyed it on tap a few years ago. Maybe the stock that makes it outside NSW doesn't move very well and there's enough Sydney siders who vote for it...

#32 - Matilda Bay Fat Yak This was certainly not a beer I thought would ever appear on Beer O'Clock Australia. As Australia's biggest macro Pale Ale it's not a beer held in high regards. I had this in Port Douglas in July (that's how long this post has been coming for!) and I don't know if it was the conditions that made this more palatable than I recall. It has some nice biscuity malts with hints of herbal and floral hops. I personally wouldn't have it in my top 500 Australian beers, but if this gets people into drinking better beer...

#44 - Boatrocker Roger Ramjet 4Most craft beer drinkers in Melbourne would've heard of Boatrocker, a brewery in Braeside producing genuinely world class sours and stouts. Roger Ramjet is the bourbon barrel aged version of their superb Ramjet Russian Imperial Stout. It's got masses of chocolate and roast characteristics, while the vanilla that is so present in the original version gets a little lost amongst the bourbon notes. It's a really special beer and would be far higher if not for it's relatively small production quantities.

#59 - Holgate Temptress Holgate is one of a handful of brewers in Australia with a Porter in their lineup. Much controversy surrounds the differences between Porters and Stouts, a topic I'm hoping to have a post up about by the end of the year - but that may well spill over into 2017... This beer is little thin, but makes up for it with masses of chocolate and vanilla with complexity arriving through some licorice and roast. It's velvety smooth and drinks dangerously easily for it's 6% ABV.

#61 - Odyssey Calypso Pale Ale I thought a trip to Mount Duneed (near Geelong) was in order when I first saw this beer on the list. Then the beer gods came through for me and Odyssey began packaging their beers! I'm so glad they did as this is a lovely Pale Ale. It has a relatively light malt base, which exacerbates the bitterness of the hops, which provide passionfruit, mango and guava flavours. I will definitely be getting my hands on this again! For a draught only offering from outside a major capital city placing at 61 is absurd! Now with national distribution we can only wait and see how high this beer will be on next years Hottest 100 beers...

#74 - 2 Brothers Grizz A beer that I know I often pass by is the 2 Brothers Grizz. It's an American Amber Ale, funnily enough brewed by two brothers, and an excellent example at that. It's got a nice caramel malt base and really quite punchy fruity hops, which provide more bitterness than you'd find in most Australian produced Amber Ales. Definitely a beer worth trying - I always enjoy it when I try it (approximately every two years!)

#88 - Bentspoke Crankshaft I had the pleasure of sampling this wonderful IPA at the brewery in Canberra while visiting my Grandmother. It's a really nice IPA packed with pine and citrus hop flavours. At the time I bemoaned the lack of packaged offerings of this beer; which have been answered in the ensuing months with the canning of this beer and their Barley Griffen (Pale Ale). If you're ever in Canberra you have to check out the venue, it's really cool and they produce a very wide style of excellent beers.

#99 - Kaiju! Hopped Out Red AThe biggest surprise for me in last years Hottest 100 beers countdown, was the 80 place fall of Kaiju's Hopped Out Red! Just like the other Red IPA's that have made the list so far; it's balanced beautifully with caramel malts and plenty of piney hops complimenting each other. I have pledged to return this beer higher up the countdown next year by voting for it; you should too! It's a phenomenal beer that deserves more accolades!

I've realized I really need to get cracking on this if I'm to finish the challenge by Australia Day. With any luck I'll get at least one more installment of this up before Christmas, in addition to some more advent stuff and the long awaited glassware post. You can follow me along live on the Beeroclockau Instagram page, I'll be trying to get a post up most days in order to meet the deadline. Until next time...

Remember it's always Beer O'Clock somewhere in the world!
Posted by Noz at 21:30