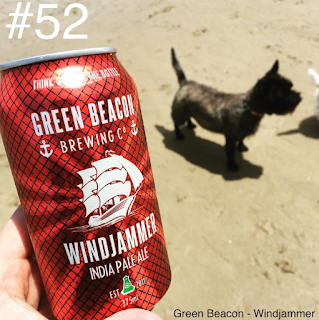 #6 - James Squire 150 Lashes James Squire gets a pretty bad rap at times. I found very little wrong with this beer, it's pretty inoffensive. The malts are light, as are the hops which provide light citrus and floral flavours. It finishes really nice and dry, leaving you wanting more (if there's nothing better available...).

#20 - Mountain Goat Steam Ale A beer I drink regularly on tap around Melbourne; Mountain Goat's Steam Ale, snuck into the top 20. It's a beer that is incredibly easy to drink, with plenty of fruit and citrus qualities. I'd highly recommend this to everyone who visits Melbourne, from experience it's better the closer you get it to the brewery.

#30 - Young Henrys Newtowner This challenge was the first time I've tried the Newtowner from Young Henrys. I found it to be a pretty generic Pale Ale - with biscuity malts on the sweeter side, whilst the hops don't provide much bitterness, only earthiness and floral qualities. Maybe it's a case of this being better on tap - I can't see it ranking this highly otherwise...

#40 - Little Creatures Dog Days I've really enjoyed the Dog Days from Little Creatures, since it was first released last Summer. Since then they've launched their canning line and this beer was one of the first to get the can treatment. It's a light bodied Pale Ale with plenty of fruitiness, particularly peach. It doesn't pack much bitterness, yet strangely isn't sweet.

#42 - La Sirene Praline It's rare that GABS beers last multiple years in the Hottest 100 Beers. La Sirene's Praline is one of those beers that have bucked the trend. It's not your typical beer though... It's a Belgian Strong Dark Ale with hazelnut, cacao and vanilla all strong flavours. It's quite sweet yet not cloying. I've reviewed this beer in full before and you can read that here.

#52 - Green Beacon Windjammer I have really fallen in love with this IPA, it's such a shame it's hard to get in Victoria... It's beautifully balanced with enough biscuity malts doing their thing so that mango, piney and grapefruit can come through in waves from the hops. The bitterness accordingly seems slightly restrained and the beer finishes beautifully dry.

#64 - 2 Brothers Kung Foo This may well be the best lager produced in Australia! Like many other craft beer enthusiasts the words "rice lager" do not generally illicit an excited response from me. As you'd expect there wasn't a heap of flavour coming from the malts, which allowed the liberal amount of citrus and grassy hops the platform to shine.

#72 - Akasha Hopsmith I first had Hopsmith from Akasha on tap at The Rainbow during Good Beer Week. Since then I've tried it a few times, both on tap and in bottles, and have been really impressed with it. It's another impressive IPA with heaps of citrus hop flavours, notably tangerine and orange, combining with plenty of caramel malts. As far as balanced Australian IPA's go, you'd be hard pressed to find better.

#85 - Bridge Road Bling Speaking of well balanced IPA's... Bridge Road's Bling is one of the most readily available Australian IPA's out there with it stocked in Dan Murphy's nationwide. It's got plenty of earthiness and caramel malts, while the hops provide citrus and tropical fruit flavours, with grapefruit the most prominent. How this beer didn't score higher I do not know.

#92- White Rabbit White Ale This is a far better Witbier than I recall it being when I've tried it in the past. It's on the slightly sweeter side, and is pretty bland although there are hints of orange and coriander that manage to poke through. It became a little cloying by the end of drinking, but that may have been because I let it warm up a little too much. Personally this isn't my thing, but technically it's a pretty good beer.

With any luck I'll get these last three posts knocked out by the end of next week. All the posts are now up on the Beeroclockau Instagram page, so please feel free to check them out if you can't wait until the next installment. Once these get finished I'll get into some new content, including a long overduce Carwyn Beer-Thusiast Pack review. You can follow me along live . Until next time...

Remember it's always Beer O'Clock somewhere in the world!
Posted by Noz at 03:58