I'm back! It has been a hectic couple of months at Beer O'Clock Australia headquarters that has seen the blog fall by the wayside a little. Lizzie & I have moved, my thesis is going to be submitted any day now and I've had reasonably major foot surgery. I'm hoping to use the ensuing down time to catchup on a few things I've neglected; starting with August's Beer-thusiast Pack review.

So this month saw the first error we've seen in nearly a year being apart of the club. We received two Stockade's rather than two 3 Ravens, which turns out not to be a bad thing. Otherwise we ended up with 8 Australian offerings, which is a first for this club, one of which is a collaboration with a well respected American brewery. We've also got 5 unique beer styles and a beer from a brewery that I've never had one from before. All in all it's a pretty good looking pack! 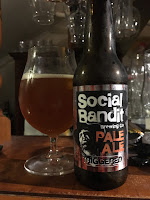 Social Bandit is a relatively new brewery based in Mansfield in regional Victoria. If I'm being completely honest this brewery had completely missed my radar. Triggered is their Pale Ale and one I'm interested to try, purely because I've never had anything from them before.

"I wasn’t a big fan of the artwork and combined with the old YAP (yet another pale) factor I wasn’t particularly excited by this. As often seems to be the case I was sorely mistaken though, this is a seriously impressive little pale. Really clean, plenty of stonefruit, good bitterness without the hops overpowering the base malts. Balance is so important with pales and this nails it, as it does with the well chosen hop mix." 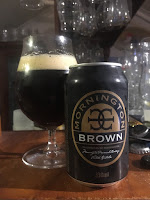 In my mind this is one of the most important beers in the evolution of the Australian craft beer scene. It's one of the first beers to become popular away from the Lager/Pale Ale/IPA triumvirate. To paraphrase James from the Crafty Pint, this is the beer that made Brown Ale sexy in Australia.

"Every time I have a Mornington beer is another installment of ‘why don’t I drink this more often!?’. Their brown is still one of the best in Australia, it’s ostensibly an English brown ale but with enough hop character to keep it bright and lively. Lots of nutty, sweet, raisiny malt with well balanced bitterness and a super smooth finish. It’s a cracker. "

I think that is everyone's reaction with Mornington. I know I get the "why don't I drink this more often's" with them almost every time I have one of their beers. They are one of Australia's best and most consistent brewery's. 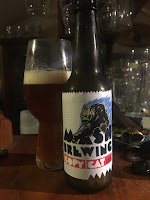 I've had this beer a few times over the years, and never had one experience that was the same. I approached this with some optimism however; hoping that the new labels were a sign they'd changed their practices behind the scenes as well. They had, unfortunately for the worse... I don't recall the last beer I poured down the sink - but that's where this went!

"While mine wasn’t as much of a dud bottle as Noz’s, this beer has never been one of my favourite IPAs. I’ve always found the sweet malts overpowering, even with the big whack of hops this beer has, and this bottle had that to the point of being sickly. It’s certainly big and piney but simply too flawed to recommend in the crowded IPA market. "

I'm not one for bagging brewery's, but this was truly awful! This bottle was clearly infected; with flavours like bandaid, butterscotch and even some Brett (not in a good way). I'm pleased Dylan's was better than mine, because I couldn't quite believe that the beer I had could've passed any sort of QC program, that I assume they have. 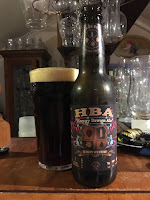 Stockade are a brewery that are really growing on me. They are the in-house label for BrewPack, one of Australia's largest contract brewing facilities. I've had about 10 of their beers now and have been reasonably impressed with all of them. I love the concept of this beer; HBA standing for Hoppy Brown Ale.

"Two good brown ales in the same month! Three cheers for Carwyn. This one is a bit bigger overall than the Mornington, but not quite as smooth. The bitterness is really nice and it has the increased body necessary to keep up with it. Definitely enjoyable — as an aside it looks fantastic too, thick long lasting head and a nice rich copper-brown." 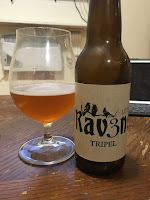 Good Tripel's, particularly Australian ones, are hard to find. Given Brendan's recent track record of producing quality offerings I'm hoping that this may be one to add to that list. Yeast is always what lets the Australian iterations down. Apparently 3 Ravens have sourced the yeast strain used by Unibroue - a famous Canadian brewery who produce phenomenal Belgian style beers. The beer sounds very promising on paper.

"This didn’t really remind me of any classic tripel I’d had in the past. It was unfortunately a fairly disappointing beer overall, with some nice yeast flavours overpowered by a cloying sweetness that persisted even as the beer warmed and other flavours began to emerge. It lacked balance as a whole and didn’t really work for me."

I have to agree with Dylan on this one. The whole thing didn't quite click for me and was cloying. The one think that worked for me was the yeast. Oh well, I'm still pleased to have tried it. 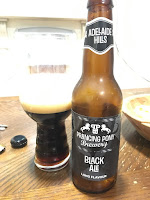 My love of Black IPA's is well known; accordingly I was thrilled to see one included in this pack; especially one from one of Australia's most interesting brewery's. Their fire brewing technique provides the most complex malt bills in the country. Although I've had this beer before -  I don't really recall it - and am really keen to try it again.

"This isn’t really the Black IPA it's billed as but it’s a nice beer nontheless. As you’d expect from a Prancing Pony joint this is a great example of how to use malt, with heaps of body and good length in the roasty, chocolatey flavours within. I did find it lacked a bit of hop punch overall which took it down a notch." 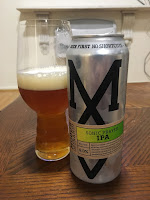 I was slightly disappointed when this beer was elevated to a year round beer in place of the excellent Zoo Feeder. Those feelings have softened over the last year as I've had more and more of this fabulous IPA. I've had 10+ cans of this over the last year and love the pine and citrus flavours that this beer gives.

"This was the first time I’d had this beer in over a year...given the amount of IPAs that are released monthly it was basically like trying it for the first time. I remember being impressed last year and this time was no different, lots of fruit salad hops on a well balanced base. It’s one of those great IPAs that’d be very approachable for the newbie while still satisfying a veteran, hop craving palate. " 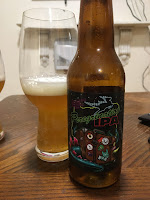 Every year a number of Good Beer Week collaborations are made. One of this years best was the collaboration between Kaiju, Breakside (from the U.S.A.) & The Catfish (the Fitzroy pub). Basically it's a version of Breakside's famous Wanderlust IPA, with the American hops subbed out for Australian hops.

"This is definitely the most straightforward IPA I’ve had from Kaiju. Being a collaboration with Breakside (from Oregon in the US) it makes sense that this is a straight up and down, clean, punchy West Coast IPA. I enjoyed it but there’s really not much to say about it — if you want a no-nonsense IPA this will definitely do the trick."\

It feels good to finally have this review done and dusted. With any luck I'll get the September one up in the next week or so, I think we've drunk all of them, as well as touching up my thesis and a couple of long overdue posts up. As usual keep the feedback coming in - I'm far more on top of that than I am on contact at the moment and I would like to turn that around.


Remember it's always Beer O'Clock somewhere in the world!
Posted by Noz at 01:05 No comments: