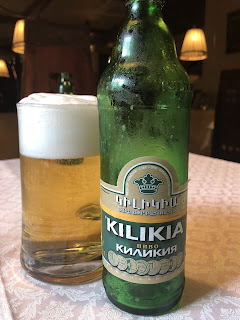 
STATS
It's been almost 3 years since I last managed to tick off a country in the European Beer Challenge. Thankfully that day is finally here! My recent trip to Russia gave me the opportunity to finally try a beer from Armenia - an ex-Soviet member bordered by Turkey, Georgia, Azerbaijan & Iran. Armenia is actually the 100th country I've reviewed a beer from on Beer O'Clock Australia.

We stumbled across this beer at an Armenian restaurant in Moscow: Ноев ковчег - which translates as Noah's Ark. It should also be noted that the food was really good - if you're looking for Armenian food in Moscow, I'd highly recommend this place. Kilikia is the most consumed by in Armenia and is brewed by the Beer of Yerevan brewery in the capital city Yerevan.

Kilikia pours like you would expect a good lager to. The beer pours a far more golden colour than I was expecting, it looks like they've actually used malt in it! The beer also had quite a thick white head topping it, which lasted for the duration of drinking - admittedly not that long for the first one. It looks like a lager that should cost more than what I paid for it - it looks well crafted.

Onto the nose and it's time to invoke the long unspoken rule of lagers; if it doesn't smell bad that's a win. Kilikia certainly ticks this box. Kilikia has initial notes of sweet grain, followed by some more sweet grain and very little else of note! I get next to no hop character on the nose, however it does smell "crisp", if that's even possible.

The taste follows on in a manner you would expect from the nose. Slightly sweet bready grains dominate the malt bill, yet the body stays relatively light. There is some faint grassy notes, reminiscent of a European Noble hop, which imparts just enough bitterness to cut through the sweet malt. It's crisp and finishes slightly dry leaving you wanting more & more!

All things considered, Kilikia is a pretty solid lager. It's well balanced with hops and malt working in harmony. I'd be quite happy to drink Kilikia again in the right circumstances - the second day of my Russian World Cup adventure was certainly that! It was a dangerously drinkable beer, Coll and I knocked of quite a few of them whilst we feasted on wonderful Armenian food. Now if anyone has any contacts in Kazakhstan, we might be able to finally finish this thing!

Remember it's always Beer O'Clock somewhere in the world!
Posted by Noz at 05:36