April's pack showcased 7 relatively new Victorian beers and one classic from the motherland. There's two lagers from the biggest breweries in the Western suburbs; Hop Nation & Two Birds. There's also two Fresh Hop beers from Red Hill, which I believe utilize the hos they grow on site at the brewery. Finally the classic beer in the pack is the Taddy Porter from Samuel Smith's Old Brewery, this is a beer I've loved since I first got into beer properly. 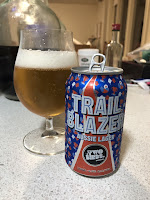 This beer was brewed by the two birds down at Two Birds to celebrate their local football club, the Western Bulldogs, AFLW team. For those who don't follow AFL, AFLW is the women's semi-professional competition that launched in 2017. Trail Blazer is such a fitting name as the Two Birds goals are pioneers in their industry as are the girls in the AFLW.

"Light cereal/biscuity malt flavour, touch of bitterness, super crisp and clean. Just a bloody well made pale lager (with a great can!)."

I think Dylan's review says everything you need to know - if you want a good, well priced lager this is one to stump up your hard earned for. 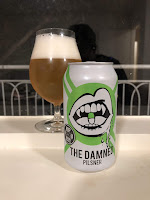 Hop Nation's The Damned was one of the early additions to their lineup. It's certainly not the most classic of Pilsners, packed with Kiwi hops Motueka & Riwaka, but it's very much in the Hop Nation mould of beers. If I was asked for an Australian example of a New World Pilsner this is one of the first that would come to mind.

"It’s not surprising given the brewery it comes from, but this is one of the more bitey and hoppy pilsners available on the Australian market. Clocking in at under 5% ABV it’s definitely made for drinking a bit of despite this, with nice lemon flavours and a sharp finish contributing. This is never a beer that blows me away, but one that I feel fits Hop Nation’s lineup very well and can be relied on when one wants a punchy, new world pilsner." 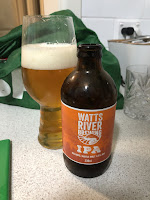 Watts River are not a brewery that gets a lot of airtime, even in craft beer circles. Watts River Brewery is in Victoria's Yarra Valley in Healesville, about an hour North East of Melbourne. I really like the shape of the bottles that their beers are now packaged in, I think if they were more readily available on bottle shop shelves they would move...

"Before this pack arrived I’d actually gone and visited Watts River for the first time up in the Yarra Valley. I was really impressed with the offerings I had there so was quite keen for this. There’s a great tropical fruit and citrus flavour profile on a clean base - definitely more of a bright, bitter, typically Australian IPA than anything with a sturdy malt base and piney hops. Luckily that’s the kind of IPA I usually reach for so I was very happy with this." 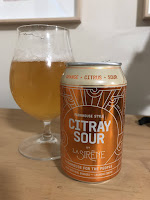 La Sirene are going from strength to strength at the moment. Citray Sour is, like most La Sirene beers, a farmhouse ale. This one has been brewed with oranges and has been naturally soured. It actually took me quite a while to get around to drinking this, I'm not sure if it was because the weather was colder or if I was just going through an anti-sour phase.

"This is almost the entry level sour the market has been screaming out for. In cans, not too tart, orange is good (leans more towards bitter orange than sweet/juicy). It’s a really tasty little beer. Hope to see La Sirene continue the sessionable canned beers as the two currently in the range are both crackers and fill a niche in the market."

I'm glad I did eventually get around to trying it! It was superb! 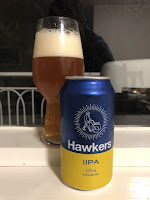 When Hawkers launched cans at the end of 2017, it seemed inevitable that their 2018 IIPA would end up getting released in that vessel. So it proved to be - and what a phenomenal beer it has proved to be! Hawkers very rarely name their beers and simply call them the style that they've tried to create, consistently they are producing wonderful examples of the styles they're looking to emulate.

"Sticky and super drinkable for 9%. Hawkers would struggle to stuff up a big, clean IPA at this stage with the amount of practice they’ve had. There’s some malt sweetness that melds well with the resinous hops, especially as it warms a touch." 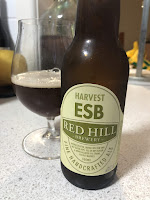 When you think of Fresh Hop or Wet Hop beers, Extra Special Bitters (ESB's) are not the first style that usually jumps to mind. Red Hill have gone with that style, alongside the English IPA they normally produce - I'm guessing because the hop varieties they grow down there are more conducive to the style.

"This was a very enjoyable English bitter. I really like the aesthetics of the hop vines out the front of Red Hill’s Mornington Brewery and it’s cool to try the fruits of that labour. There’s an intriguing mix of deep earthiness and fresh, floral notes that work well together."


This surpassed my expectations. The hops really leant themselves to the style with their earthy/floral notes really complimenting the maltiness. 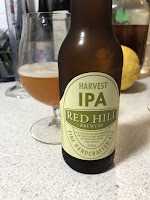 Conversely India Pale Ale's (IPA's) are the style that is instantly conjured when people talk about Wet Hop IPA's. Early March is hop harvest time in Australia and the Hop Harvest/Wet Hop/Fresh Hop IPA's all come out in the ensuing month. Red Hill's is one I always keep an eye out for as their take is more traditional than the big New World & West Coast offerings that are so dominant in the Australian market.

"I was worried this might come out a bit too green, but it wasn’t an issue in the end. It’s a very straightforward IPA, golden/orange in colour with some solid pine and citrus flavours." 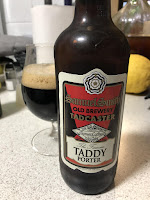 As I said at the top; this is an absolute classic beer! If you were to ask me to name an English Porter it would be out of this and Fuller's London Porter, another beer to feature in a Carwyn Beer-Thusiast Pack back in May 2017. If you haven't tried this Porter before you absolutely need to seek it out!

"I do enjoy Carwyn including some more classic English (and other European) beers in these packs from time to time. This is a fairly unremarkable porter, but there’s some nice chocolate and dark fruit on a light, smooth base. Perfectly drinkable."

Dylan is back from holidays and we're getting back onto these reviews. With any luck May's review won't be too far away... I've got a couple of other bits and pieces that will hopefully tide us over until we get new Beer-Thusiast posts up. We will also have the second episode of the podcast up as soon as it's edited - so look out for that in the next week or so. Until then guys, keep the emails coming (gus.norris7@gmail.com) and I'll endeavour to get back to all of you.


Remember it's always Beer O'Clock somewhere in the world!
Posted by Noz at 04:25