This month we get to sample 7 Australian offerings & one classic from the United States. The weather was getting colder in May - so we saw some maltier offerings than in previous months; with a Red Ale, Red IPA, Imperial Red IPA & an Oatmeal Stout all making the cut. 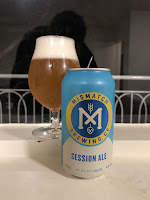 This beer joins the ranks of beers that have been duplicated in the Beer-thusiast Pack; sitting alongside the luminary Rodenbach Original. Dylan & I both really enjoyed this beer back in December 2017 and so weren't displeased to see it again.

"This is a really clean, tasty little session IPA/lower alcohol pale/easy drinking Indian ale/whatever you want to call it. Lots of stonefruit from the hops - bright peach flavours that pop and dissipate quickly. Super drinkable." 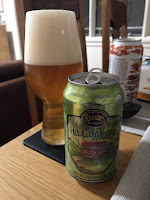 Another low(ish) ABV hop driven beer arrived next; the Founders All Day IPA. Somewhat surprisingly I've never reviewed this beer in full - despite foreshadowing an upcoming review in February 2014...This is the beer that really put Session IPA's on the map for me. The fact we get them really fresh certainly helps that!

"One of those beers that I’d basically forgotten about after being a mainstay in the past. This was the first time I’d had it out of a can and it’s really the perfect format for it, a smashable little hop package. It’s more balanced and sessionable than something like Stone’s Go-To IPA (which I’m also fond of, mind you). It’s the kind of thing I’d drink a lot more of if we got more reasonably fresh cans into the country. As it is, it was a nice beer to revisit." 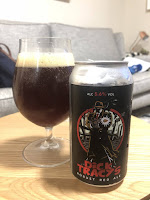 The story behind this beer wasn't publicized anywhere near enough, for which I'll defer to The Crafty Pint; "The year was 2011. Three fellas called Brendan, Lachy and Darcy had more time on their hands than a clockmaker. They brewed a beer together like witches over a cauldron: a hoppy red ale. And they’ve been thinking about it ever since. Waiting for the day they’d brew it again. Waiting for Brendan and Lachy to become head brewers. Waiting 'til now."

"Full bodied red - the ‘robust’ in the name is apt. Nice biscuit notes from the malt with good balance in flavours between malt and hops. Hops lean more in the floral direction than anything and aren’t particularly punchy, but suitable for the style. Touch of sweetness. Well crafted." 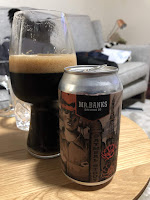 Mr Banks' winter seasonal is a classic style of choice for the colder months; an Oatmeal Stout. This beer is one of the few survivors from the original Mr Banks releases, with almost all the others superseded. Strangely, this will actually the first time I'll have had this beer and I'm really looking forward to it.

"Roasty and creamy, very smooth. If there’s hop bitterness in here it’s well hidden! One of those really drinkable little stouts which I’m occasionally really in the mood for. Sidenote: the cans we got were probably some of the last in the old packaging. While I quite liked the old art style Mr Banks had going, I must say the new core range packaging is some of the cleanest and nicest to look at on the market at the moment (along with Wayward and a few others). Kudos to them."


I have to second what Dylan said about the cans. I was a massive fan of the old cans, but I imagine they cost a fortune to produce! The new ones are so clean and are going to sell seriously well! 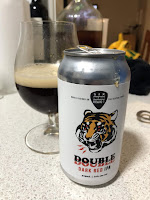 Six String is a brewery on the New South Wales Central Coast that is not that well distributed in Melbourne. That is with the exception of their flagship "Dark Red IPA", not many brewers can say their flagship beer is a Red IPA! For IPA Day last year their brewers decided to have some fun and supersize their flagship and the result is this 10% beast.

To sum up quickly and succinctly; a seriously well done Imperial Red IPA! 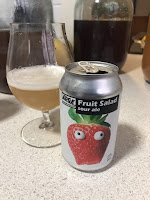 Edge have slowly morphed from this niche brand that leveraged Adam's distribution brand to do some collaboration brews with world renowned brewers. This is the supposedly the first in a series of Fruit Salad Berliner Weiss's. This one has had 6 different fruits added to a simple Berliner Weiss base.

"It’s fruity without really tasting like any specific fruit - I guess it lives up to the name in that regard! Very light bodied, not too tart and refreshing. Perfectly enjoyable little berliner."


I thought this had a distinct smell of apple & strawberry baby food although, like Dylan, I wasn't able to pick out a specific fruit when tasting this beer. All-in-all, this is really well done little beer. 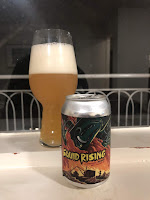 Squid Rising was the second release in Mornington "Squid Series". Yes, Dylan & I are that far behind that the third beer in the series has been released! This is one of the best NEIPA's in Australia; it's so juicy & unlike most Australian NEIPA's it isn't unnecessarily bitter.

"I liked this a lot more in cans than on tap weirdly enough! Waves of sweet, juicy tropical fruit, with that slightly too high but not a dealbreaker level bitterness that is ever-present in Australian NEIPAs. It’s a worthy entry into the style." 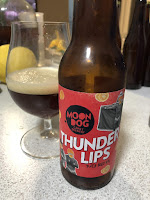 I remember the days where I used to hang out for Moon Dog's limited releases. For at least a 2 year period I would buy them, every time they released new ones, which seemed to always come in twos. Those days may be gone - but with the addition of their new production breweries, maybe they'll return? This is a Red IPA which has had heaps of Yuzu added to it - it should work on paper! But, as was the case with many past Moon Dog limited releases, the taste will be in the pudding (or beer?).

"I liked the idea of this but thought the flavours clashed quite a bit sadly. There was a malty richness that just didn’t gel with the sharp citrus like I thought it would. You end up with a beer that has nice individual elements that don’t meld at all, creating a muddle on the palate as the end result. Probably not one I’d revisit, but as always I love that Moon Dog are willing to try things."

This just didn't work! The malt & citrus really clashed. But this is why you have to love Moon Dog - they have a go at everything; some work, some don't!

So there we have it guys, May's pack review is finally up; it's only taken until late October! Dylan & I have a rough plan of trying to be up to date by Christmas. Most of you probably know by now how timeline promises on this blog go, so I wouldn't hold your breath... In the meantime there will be a new podcast episode up any day now & with any luck there will be some other new content soon.


Remember it's always Beer O'Clock somewhere in the world!
Posted by Noz at 05:39