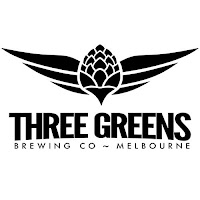 STATS
These guys are one of the reasons I wanted to start this directory of Victorian brewers. Despite Three Greens being around since the middle of last year I'd never heard of them - if I haven't heard of them I wonder how many others haven't either. This is my way of giving back to the local industry that I love so much (possibly too much?).

Three Greens Brewing Co launched their first beers into the world in the middle of 2018. The company has a similar story to many I've heard; individuals enjoy home brewing, like minded individuals meet, shortly thereafter they start a brewery. That seems to be the story for Nick, Luke & Julien who met through their other shared passion, aviation, which doubles as their day jobs.

For those who aren't aware their brewery name, Three Greens, is a reference to their day jobs. Airplanes aren't able to land unless they see the three green lights indicating that the landing gear is safely locked into planes. The fact that there are three brewing partners is entirely coincidental, although it is a nice touch! This year the guys are looking to continue to grow their business in 2019, by expanding their core range and release as many special releases as they can. 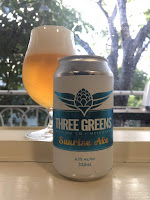 Three Greens don't currently have a place to call their own and are currently brewing out of Cavalier, a brewery that has helped so many brewers start out in Victoria. The guys have ambitions to have a large brewpub in the future, but they'll only be able to do that if the beer is good enough...

I was able to get my hands on their Sunrise Ale, so that's the beer I'll be reviewing for The Year of Local. It's a 4.5% Pale Ale that utilizes Cascade, Simcoe & Citra hops - a promising start! The beer pours a medium gold colour, whilst there is a thick white head sitting atop the liquid that lasts, at least in part, for the duration of drinking.

The nose is very mild with a bit of caramel and biscuit malt the only thing really jumping out at me with very little hop character present. This however didn't translate to the taste, which combined some citrus and fruit notes with the malty notes. I was surprised to see rice in the grist, it tastes full bodied so I'm not sure what purpose it is serving as they obviously aren't using a heap of it... All in all, it's a really well balanced Pale Ale & one that I would quite happily drink again if offered it.

Remember it's always Beer O'Clock somewhere in the world!
Posted by Noz at 22:34