STATS
Burra Brewing Co is a brewpub based in the small South Gippsland town of Korumburra, about an hour and a half from Melbourne. Like so many wonderful ideas, the idea for Burra Brewing Co started on a boys trip away, on the golf course, after a few too many beers. Most of the times these ideas are forgotten whilst partaking in even more beers or in the haze of the next day. Some remain as a in-joke; "Remember when we said...". Very rarely they get acted upon. 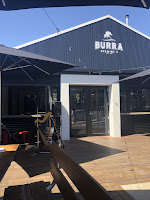 This is what happened for Phill, Anthony & Luke, now co-owners of Burra Brewing Co. That boys trip in 2013 lead to four years of research & planning before Burra Brewing Co was finally born in 2017. The doors to their brewpub were officially opened by their local MP on August 11th, 2018 to much fanfare in the township of Korumburra.

The town of Korumburra has a population of 3,500-4000 people and is situated 120km south east of Melbourne. It's a highly fertile area with excellent meat, dairy products, fruit & wine being produced in the region. Some of the co-owners are from Korumburra and decided to open their brewery in the township due to the growing food tourism trade.

The building that now houses the brewery was a run down nursery and farm supplies shop on the main street in Korumburra. It's been put through a serious transformation to house the brewpub; the before & after photos are quite remakable. I initially thought it must've been a new build when walking up to the brewery, such is the difference to the surrounding buildings.

Out the front of the brewery is a large decking area, which functions as a beer garden. We visited on a Sunday afternoon, there was a good crowd of people enjoying the beers & the sun whilst sampling a few of Burra Brewing Co's finest. They had a musician playing, complete with a harp - something you don't see at most breweries!

The bar is just inside the door, with prominent colourful tap decals. The whole brewery is designed around showing off the brew house, with plenty of stainless steel on display through windows behind the bar. We'd already eaten so didn't sample any of the food on offer, however what we saw looked really good! They predominantly do wood fired pizzas, although there are also some salads, snacks and desserts on the menu. 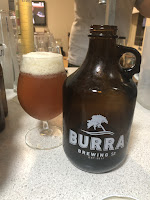 I was pleasantly surprised by the variety of beers on offer at Burra Brewing Co. I had an Amarillo IPA & a Maple Porter, amongst others. I've decided to write about their Pale Ale, which I took home in a squealer. I think drinking their Pale Ale is a really good way to measure a new brewery, particularly in Australia.

I have to say I was impressed by the version I had from the brewery, which was well balanced with nice toasted malt characters and tropical fruit hop notes. The bitterness is apparent, but fits in nicely with the overall composition of the beer.

Remember it's always Beer O'Clock somewhere in the world!
Posted by Noz at 01:45