STATS
Foreigner Brewing Company launched in late 2016 to little fanfare. Since it's gained a loyal local following and is known only by the most ardent of Melbourne craft beer drinkers. The brewery is a little off the beaten track, tucked away in an industrial estate in one of the less populated parts of hip Melbourne suburb, Brunswick. 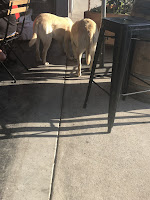 The brewery was started by two mates, Mira Koman & Peter Denison, both of Czech origin, who met through a Czech expat group in Melbourne. Both loved beer and naturally they progressed to brewing beers from their homeland at home, before dreaming up & building their own brewery.

And when I say building their own brewery, I mean it! Mira is a boilermaker by trade & literally constructed their fermentation tanks & parts of their brewhouse. They shipped in friend & respected Czech brewer Petr Petruzalek, a man who spent two decades brewing Pilsner Urquell before entering craft, for recipe development; and Foreigner Brewing was born.

The converted warehouse that houses the Foreigner Brewing Co is relatively small on first impressions. There are a few tables scattered around the front of the warehouse where the bar also sits. The brewery is in the back left, roped off from the public but clearly visible. Shelving is stacked high with all manner of equipment. You can even find the grain mill covered by the bathrooms.

The space is quite eclectic. It's busy with hanging plants & seemingly random items placed everywhere, yet somehow it all comes together to create a really interesting space. The vibe on a sunny Friday afternoon/early evening was great, full of people (& dogs) of all walks of life enjoying the start to their weekend. The staff were friendly, knowledgeable and really seemed to enjoy what they were doing and where they were working. 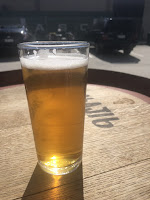 After gushing a little over the venue, I'm now going to gush over the beer. Having owners of Czech origins the beer I was going to review was always going to be a lager of some description, although I was somewhat disappointed not to come across a Czech Tmave.. I picked the Silent Hunter Pilsner - their flagship beer - a true Czech Pilsner.

As soon as the beer was poured you knew you were in for a treat. The colour is a beautiful golden straw, with wonderful clarity and a small white head. The beer has this lovely Pilsner malt sweetness initially that gives way to the grassy/herbal notes that Saaz is so well known for. The beer finishes dry and bitter, just leaving you wanting more!

Remember it's always Beer O'Clock somewhere in the world!
Posted by Noz at 00:55