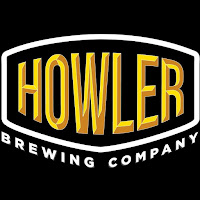 STATS
Lang Lang is a small town located roughly 70km south east of Melbourne. The town entered my consciousness at an early age, as my grandfather was a long term member of the Lang Lang Golf Club. It's an area known for beef & dairy production, and is also the centre of the largest aspargus growing region in the southern hemisphere! All said and done, it's not a town you'd expect to find a craft brewery. 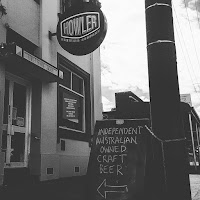 As you drive down Westernport Road, the main drag in Lang Lang, you spot the brewery on the edge of town. It's housed in an old bank, built in 1929 & originally tenanted by ES&A Bank (English, Scottish & Australian Bank) before becoming an ANZ branch after their takeover of the former in 1970. The building stat idle for 5 years before Howler came along two years ago.

They've done a heap of work changing the building into a space to serve beer, and soon to brew their own beer on site. The team are hoping to have a 600L pilot system setup out the back by mid-March and they aren't stopping there! They have plans to have a bigger off-site production facility up and running in the next three years and to spread their beer far and wide.

The brewery is named after the Howler, something of a local legend, a mysterious creature said to inhabit the swamp lands around Lang Lang. It's said to be a bigger, tougher version of the more well known Bunyip from just down the road. 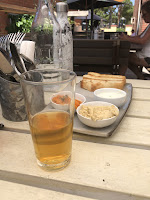 The brewery has become something of a local legend as well, supporting both the Nyora Football & Netball Club as well as the Lang Lang FNC. This community aspect continues into their supply chain, with their kitchen serving as much local produce as possible.

We arrived at Howler on one of the hottest days I can remember in Melbourne. Our dog Jimmy was with us, so we had to sit in the beer garden and sweat it out. Despite the heat; the beer garden was quite pleasant, it's well shaded by umbrellas and there was a gentle, if warm, breeze blowing through. The vibe was really nice with an acoustic guitar player playing & a number of people enjoying their Sunday lunchtime - I got the vibe that there were more locals than craft beer lovers, which is so pleasing in a smaller town.

I was really impressed with the offerings; both beer and food that we sampled at Howler. The Moroccan Pumpkin dip is one of the best brewery foods I've had! Their beers are lower in alcohol than most breweries, with their IPA clocking in at 5.8% ABV; that didn't stop it being exceptionally tasty. It's a great example of why IPA's should be clear & bitter, not hazy. 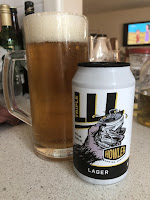 There are only so many craft breweries out their producing good lager, although that number is growing. That's why I've decided to review Howler's Triple L - Lang Lang Lager. I had this on tap at the brewery and also took a 6-pack away in cans, which look great with the black lids as an aside.

Lang Lang Lager pours a lovely golden colour with a fluffy white head. The head dissipates relatively quickly however, and shortly there is none left behind. The nose indicates some sweetish, bready malts. This carries over into the taste where it is complimented by some lovely grassy bitterness. It's a really well balanced lager and one that was incredibly refreshing on a hot afternoon at the brewery in Lang Lang.

Remember it's always Beer O'Clock somewhere in the world!
Posted by Noz at 02:07