STATS
The story of Black Heart Brewery is a familiar one, two mates like homebrewing & start a brewery; the execution here is a little different. Unlike the vast number of brewers flocking to warehouses in industrial parks Robin Smith, a cardiothoracic surgeon, and Brad Schulz started their commercial brewery in Robin's backyard.

Robin had some serious brewing pedigree, having won the 2009 Victorian Amateur Brewing Competition before taking out the Australian Amateur Brewing Competition the following year. The 2009 title proved the inspiration to start their commercial operation, with their first beers launching at the old Victorian Microbrewery Showcase at Fed Square at the backend of 2011. Their passion had become a second job! 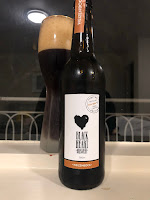 The Black Heart Brewery could be described as the largest home brewery in Australia. They are tucked up in a shed next to Robin's pool at his Brighton residence. Being confined to a shed means that the duo don't make a heap of beer. They have 500L & 300L fermenters and produce about 500 bottles, alongside kegs, per batch. I honestly wasn't sure if they were still in business when I started this project, as it'd been so long since I'd last seen any of their beers!

It's not everyday you see a Weizenbock, let alone an Australian brewed one! As soon as I saw this I knew this was the beer I'd be reviewing. It's bang on stylistically! It's a cloudy brown beer with some dark malts, raisins & moderate bitterness. There are also the banana and clove esters that you expect with German Wheat beers. If you can track down a bottle of this I'd highly recommend it!

Email ThisBlogThis!Share to TwitterShare to FacebookShare to Pinterest
Labels: Australia, The Year of Local, Weizenbock