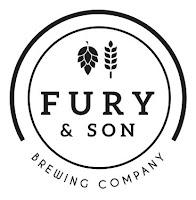 STATS
Fury & Son first started producing beer commercially in the middle of 2016. At the time, the name sounded like a corporate trying to surreptitiously fit into the hipster/craft beer market. First impressions are often wrong and they certainly were in the case of Fury & Son, which is about as authentic as any craft brewery out there. 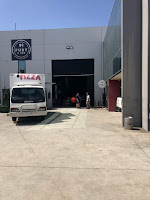 The brewery was started by Reno "Fury"Georgiou & his son Andrew. The pair had been home brewing together on & off for 15 years before taking the plunge into the commercial realm. They found a warehouse near Reno's other business, Renma Windows, in an industrial estate in Keilor Park and began installing a 25 hectolitre brewhouse.

Initially they launched with a core range of two beers, a Pilsner & a Pale Ale & no hospitality component. Fast forward almost 3 years and the brewery produces a number of seasonals, ranging from sours, to Scotch Ales to Imperial Stouts. In late 2017 the brewery began opening to the public on Friday afternoons.

A brewery that only opens on Friday afternoons in Keilor Park. It didn't sound like the easiest of brewery's for me to visit. As luck would have it I was out at the airport for work a few Friday's back and was able to drop past, albeit only for one beer. Arriving at 12:10pm on a Friday afternoon, 10 minutes after opening, I was expecting it to be pretty quiet; I was wrong!

The brewery was packed! So packed it was tough to get a seat! You may get the impression that this is a small operation; it's not. There's seating for approximately 100 people and it was all full. There was a range of people there too, from high vis wearing factory workers to guys in suits. It's quite clear that Fury & Son have done well to engage their local community.

Accordingly, due to the packed nature of the tasting room, the vibe was great. It seemed like a lot of these people had knocked off for the day and that this was where they were starting their weekend. The brewery get food trucks in to do food, on the day I visited there was a pizza truck doing a roaring trade! 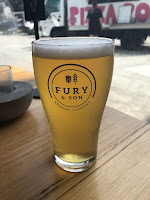 The tasting room is on the brewery floor, amongst the tanks, which incidentally are some of the larger ones I've seen at an Australian craft brewery. There are a mix of long communal tables with a couple of smaller tables in an adjacent space in front of the bar, which is just off to the right hand side as you walk in.

Even though I don't collect glassware anymore, I still appreciate a brewery that serves their beer in branded glassware. As I was driving & still working on the day I visited I went with the Pilsner. It's actually the first beer I had from Fury & Son back in late-2016, so I was interested to see if much had changed in the ensuing 2 and a half years.

I'm pleased to report that it's still a nice refreshing Pilsner, brewed to style. The malts are light, the hops are grassy & bitter (I'd be shocked if they weren't Noble Hops) and the beer is crisp and refreshing. There was a slight metallic/sulphuric taste that I couldn't quite place, but it was light and didn't drastically impact my enjoyment of the beer - after 2 I don't think you'd even notice it. It's a really enjoyable Pilsner and one that I would suggest if you're looking for a traditional Australian brewed Pilsner.

Remember it's always Beer O'Clock somewhere in the world!
Posted by Noz at 16:44