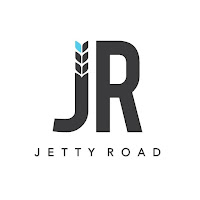 STATS
Jetty Road became the latest brewer to join the growing number of breweries on the Mornington Peninsula - about an hour S.E. of Melbourne - when it opened it's hospitality venue in late 2017. At that time, as for the previous year, their beer had been contract brewed at various sites around Melbourne. That all changed in November 2018 with the installation and commission of their own equipment on-site at their venue in the same industrial park in Dromana as Two Bays.

The brewery is the owned by 6 Mornington Peninsula locals. led by Head Brewer Blake Bowden & Managing Director Grant Rogers. They also have a relationship with "independent craft accelerator" Founders First - who provide a similar funding model to venture capital.

The name regularly confuses people; why is a brewery on Brasser Avenue called Jetty Road? The answer is relatively simple. 2 of the founders used to brew at a private residence on the actual Jetty Road in Dromana - a 5 minute drive from the brewery. The name simply stuck!

Jetty Road's brewery and restaurant/beer hall is located in a huge warehouse space in the industrial area behind Dromana. It's clearly undergone significant renovations to create the wide open space. There's a mix of high and low tables scattered around the restaurant with a few tables out the front in case you want to bring your furry friend along. The food is mostly share plates & it's genuinely good! The wine list is well curated, as you'd hope in one of Victoria's best wine regions. It's a venue you really could bring anyone to.

The bar is on the wall alongside a huge glass window which you can see through to the stainless steel. It gives the illusion of being in amongst the brewery when it is in fact completely separate, handy for OH&S. There's a few mural scattered around (as seen above) and by all reports there is a beer garden, which I may have not come across... 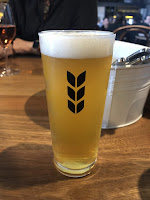 Now to the beer. Jetty Road have had a core range (Pale, IPA, Draught) available in cans since before they opened their Dromana brewery. The beers are clean, well branded and placed well in the Hottest 100 last year. I wasn't sure how their more experimental offerings would fare

Thankfully they were pretty good. I've chosen to write a little about their Infinite 8, an Imperial IPA clocking in at 8.8%. As you can see from the picture, it's a little lighter in colour than you'd expect from the style. This translates to the flavour, with less malt character coming across although there is some biscuity sweetness. There are plenty of hops, mostly offering tropical fruit and a little citrus as well as some balancing bitterness. Overall I thought it needed a little more malt as there was a touch of unmasked raw alcohol.

Remember it's always Beer O'Clock somewhere in the world!
Posted by Noz at 18:35