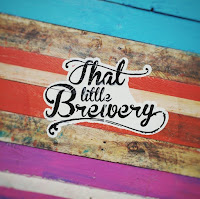 STATS
That Little Brewery is located in Ferntree Gully. It's a brewery that Dylan & I have had on our radar pretty much since they opened, given they were producing lots of sours in an area awash with nothing but macro lager, but have never quite been able to find the time to get out there; until recently! 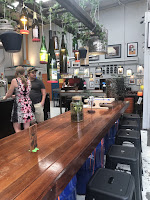 That Little Brewery is another family affair. The brewery is run by brothers Ben & Callan Pratt along with their cousin Andrew Jamieson. It's based in a relatively small warehouse in an industrial estate in what seems like a residential part of Ferntree Gully.

It's a bit different to most breweries you walk into. Firstly, you enter through their office space. Once you move through the office you are confronted with a metal portable bare in front of the tanks and brewing kit. There's a lot of stainless around, although most of it is quite small.

The brewery is colourful. The furniture is rustic and mismatched. The chandelier is made up of old bottles with the bottoms cut off. There's bits & pieces, posters, branded oil drums (in fact lots of things have logos on them) everywhere you look! There are also heaps of games dotted around - as well as an area, which could easily be someones living room, where you can play video games. It's a really cool space.

Whilst they offer no food themselves, That Little Brewery arranges for food trucks to visit the brewery most weekends, the day we visited it was American BBQ which looked really good as it was delivered to those around us (we'd just eaten so didn't partake). They also make their own syrups for Berliner Weisses, which were quite good, they would be one of very few in Australia doing that. 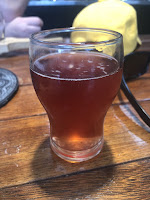 The tap list was genuinely interesting - with a mix of beers that you generally wouldn't find, even at craft beer bars. There was no Pale Ale, no lager; in their place was a Session IPA & a Sour Pale Ale. Interestingly, you could only buy tasting glasses, which were large, or growlers on site. I wonder if there is some liquor licensing issue at play (I'll try and confirm if I get an email back!), which could also be leading to the eschewing of traditional quaffing styles.

The beer I'm going to review is the 6 month old Raspberry Lambic. I don't particularly like the use of the word lambic in this beer, but I understand why they've used it. The beer was tart with tiny bubbles rising in the beer, It's hard to describe, but the beer wasn't quite spritzy because the bubbles were as small as they were. It was definitely light and tingly on the tongue. The flavour was predominantly raspberry, with good fruit translating. The colour, as you can see above, was spot on. It's a really interesting beer, I'm looking forward to seeing it with some more age on it.

Remember it's always Beer O'Clock somewhere in the world!
Posted by Noz at 22:02