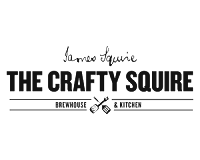 STATS
The first of the big boys to get a run out in The Year of Local is The Crafty Squire. As the name would suggest their is a link to the James Squire range, which is owned/produced by Lion (formerly Lion Nathan). James Squire bears the name of a convict who was transported to Australia in 1788 on the First Fleet for stealing. There is a lot of hyperbole & mistruths that abound around James Squire's life; what we can say for sure is that he was the first person to cultivate hops in Australia and one of the first brewers.

The Crafty Squire is one of the brewpubs that Lion setup to further the illusion of the "craft" nature of the James Squire brand, they have one in almost every major city around Australia. The brewhouse was installed in 2001, however the venue continued operating by its former name, the Portland Hotel, until 2015.

The brewhouse is operational and used to create seasonal offerings, unique to each brewpub. Alongside these brewpub specific beers you can also sample the full range of regular James Squire offerings as well as some nationwide limited releases. The brewhouse is situated at the front of the building, so that passersby can admire their wood clad kit.

There are a number of different spaces throughout the building, it's a huge old Melbourne pub after all! However, I seem to always find myself in the "Craft Bar". It's a space that you would find hundreds of times over in Melbourne. High tables, plenty of stools, plenty of TV screens showing a variety of sports until the wee hours of the morning (they're open til 5am Fridays & Saturdays!). Despite being a semi-regular visitor, I've never eaten here so can't comment on the food offerings. I'm sure they're reasonable though as I'm aware that a lot of people do repeat functions at The Crafty Squire.

For the beer, I'm reviewing one of the more aptly named beers; The Convict. It's a straight up and down English Bitter clocking in at 5.5% ABV, brewed in the heart of the Melbourne CBD. It's also excellent! English style ales are rarely brewed well in Australia but this one fits the bill. It has layers of malt, predominantly biscuity variants, which pairs superbly with the earthy hops that provide plenty of bitterness.

Remember it's always Beer O'Clock somewhere in the world!
Posted by Noz at 23:15

Email ThisBlogThis!Share to TwitterShare to FacebookShare to Pinterest
Labels: Australia, English Bitter, The Year of Local