STATS
West City Brewing was the brainchild of Bevan Dalziel, founder of Facebook group Westside Beer Drinkers, & Fergus McGregor. The brand launched in late 2015 with their first release Footscray Ale, baring a wonderful cartoon landscape of the iconic West Gate Bridge, the gateway to the western suburbs. It gave the brand a real sense of place, something that is hard to do with gypsy brands. Footscray Ale developed an almost cult like following, in a very short space of time, in the inner west of Melbourne.

Things seemed to be going along swimmingly until Bevan had to step away from the business to focus on family & other business interests. The duo, who had gained a few others along the way, simply couldn't give the brand the attention it needed and subsequently put the business up for sale in August 2017.

The story went very quiet thereafter, it seemed as if West City was dead. That was until news in August 2018, that Grand Ridge had reached an agreement with the original owners to brew Footscray Ale & Oaty Session Stout and relaunch the brand, with stock to hit the shelves in mid-September.

Grand Ridge were attracted to the fun nature of the brand and the organic nature in which the brand had developed a community around it. I thought long and hard about whether to include West City or not - but decided that the original story & the fact that Bevan is involved in the relaunch was enough to tip me over the edge. It's a great brand and will be interesting to see if the reception is as strong now that the beer is openly brewed 170km away from its spiritual home... 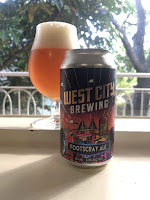 Thankfully in the relaunch they've kept the original artwork! In the process they've moved the beer from bottles into cans, which I think really fits with what West City Brewing (& in particular Footscray Ale) is all about.

The beer is more hop forward than I recall; with citrus, predominantly grapefruit, & tropical fruit notes really shining through. There is a good amount of caramel malt flavours, paired with some breadiness that lays a platform for the hops to shine through. There's a moderate amount of bitterness that leaves you wanting another.

Remember it's always Beer O'Clock somewhere in the world!
Posted by Noz at 20:39