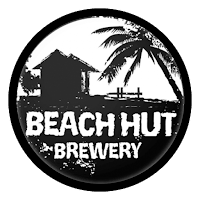 STATS
The biggest surprise of our trek through the breweries of South Eastern Melbourne was Beach Hut Brewery. We walked in and were greeted very warmly by brewer and owner Shane Ward, who it's fair to say is a larger than life character. He clearly loves his job and was more than happy to talk us through his range & to discuss his methodology. 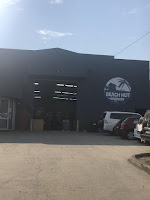 One of the most pressing question I had was why is a brewery in industrial Scoresby called Beach Hut? The answer surprised me. Initially the operation was far smaller and based in the coastal town of Torquay! The brewery was based there from 2013, before upscaling and relocating to Scoresby in 2016.

And upscale they did! The warehouse is big and very open. The brewery is located along the back wall, with tanks scattered along the left hand side. There's shelving stacked high with everything you could conceivably need down the right hand side, with the bar just in front. The middle houses the seating area, which is pretty spacious.

They've used reclaimed pallets to great effect, using them where they can to create tables and benches, whilst also constructing a fence out of them to divide the customers from the brewing equipment. It really does feel like you're sitting in a brewery! We didn't eat, having already had lunch, but the pizza's that went passed us looked & smelt great! 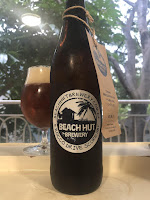 It's interesting to me that this brewery has been around for years and is yet hardly known. It's been described to me before as a "Dad brewery", a brewery for ~60 year old men who like a little variety in their beer, but not too much. This is a bit harsh; although I get where those people are coming from. They brew more English inspired beers, with flavours focusing more on malt. Maybe they aren't interesting enough to the craft drinker who is looking for maximum flavour?

With that said; the beer I've decided to review is the 93 Bears Pale Ale. It's the Beach Hut take on a traditional American Pale Ale & is hopped exclusively with Cascade. This really comes through in the flavour, with the hop flavour quintessential Cascade. The malt bill is a bit bigger than most Australian examples of the style, but this just balances the beer beautifully.

Remember it's always Beer O'Clock somewhere in the world!
Posted by Noz at 05:38