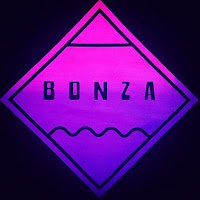 Since then he's been able to rent tank space from his current employer, Jetty Road, and begin brewing on site after the installation of their brewery. This has proved to be the perfect scenario for him as he is able to more closely monitor his brew rather than relying on someone else to do it for him.

There's an environmental aspect to Bonza Brewing's business, with one native tree being planted for every 50 Litres of beer sold. The Australian native theme continues with their artwork (pictured left), which I really like. It's the work of a Melbourne based tattoo artist called Mark Lording, from Vic Market Tattoos, who is known for his Australiana work. 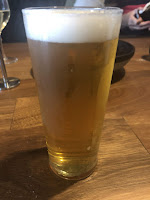 To date, there is only the Australian Ale available from Bonza (I'm aware their is a Dark Ale on the way...). I had the Australian Ale down at Jetty Road, where Mick gypsy brews, in the most hands on sense of the term. It's not the greatest beer you've ever had but it is a solid example of what it is trying to be.

The malt body is light and on the sweeter side. There's a fair whack of hop flavour, primarily citrus & stone fruit, although there is very little accompanying bitterness. It's a beer that I can see people quite happily enjoying a full session on, I certainly would be happy to! Keep an eye on what Mick gets up to over the next few years!

Remember it's always Beer O'Clock somewhere in the world!
Posted by Noz at 20:20