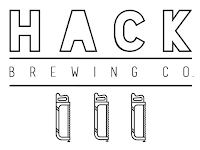 STATS
The world was introduced to Hack Brewing Co in September 2016, their Untappd listing was actually created on my birthday. The brewery was started by Jamie Cox, ex-Kooinda & Prosciutto Bros, and a few mates (James, Chris & Doug) when Jamie decided he wanted to get back into making beer rather than running a craft bar/deli in Eltham.


So what's in a name? The guys in the typical Australian self deprecating way, decided to tell it like it is and call themselves hacks. According to them, they're not the best so why try and act like they are. I've really struggled to get in contact with the Hack Brewing guys, so I do apologize for the brevity of this opening gambit. If the guys read this I would love more info from you - to better tell your story! 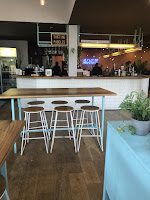 The venue, from the outside, looks like a lot of pubs in Port/South Melbourne. The facade is pretty old & not that well up kept. Inside is quite the opposite. It's clearly had a big refresh, it's very open, light & modern. My understanding of The Hack is that it is ostensibly a craft beer pub that also has their own range of beers.

As you walk through the doors you're confronted by a white tiled bar directly in front of you. Minimalist tables are scattered about the main bar area. To your left is a large board with the tap list, with some confusing abbreviations. To the right are some more tables and some couches. There's some characters on the wall that look like the works of Pocket Beagles, but I haven't confirmed that as yet.

The food menu is impressive, a sort of predominantly Mexican influenced gourmet pub menu. I arrived after I'd already had lunch one afternoon so didn't partake in a full meal. I did have a Pork Bao (which I am aware is not Mexican!) as a snack & at $4 I don't think you can beat the value! The pulled pork was excellent and the vegies were fresh & crisp! 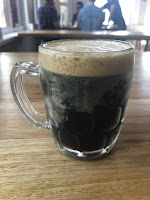 I wish I could say the same about the beer! I had the Crunchy Porter, and there were a few issues... Where to start? Well firstly I don't like the infringement on the Crunchy IP - it's only a matter of time before a brewery really gets bitten badly. Secondly, look at the picture to the right, that mug was filthy! That's really not a good first impression.

Then the beer itself, it's supposedly a chocolate porter with honeycomb. It was certainly a chocolate porter, not a brilliant one but a porter nonetheless. There was some toasty malt flavours that complimented the chocolate & caramel malts nicely. It was quite sweet, with just enough bitterness to balance the beer out. I couldn't pick up any honeycomb, if it's there it's very light.

Remember it's always Beer O'Clock somewhere in the world!
Posted by Noz at 18:47

Email ThisBlogThis!Share to TwitterShare to FacebookShare to Pinterest
Labels: American Porter, Australia, The Year of Local