2019: The Year of Local
STATS
One of the stranger beer stories to come across my desk recently was the news that Wrong Side Brewing were upping roots from the Jamieson site that they've called home since 2016 to become gypsy brewers. Normally brewers strive to own their own space & not have to worry about finding spare capacity at various breweries around the country. I can't recall ever hearing someone go the other way...

But before we get into that, some background. Wrong Side Brewing launched at the end of 2016 when husband and wife team Paul & Deb Hann took over the old Jamieson Brewery site on Lake Eildon. They're British ex-pats who moved to Victoria with their 4 young children (& dogs) from Queensland in 2011. 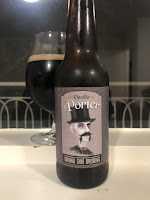 Paul worked as a railway engineer for over 20 years - this is where the brewery derives its name from - before studying brewing technology and taking on the challenge at Jamieson in the Victorian High Country. From all reports, I never made it up there, they completely gutted the venue, gave it a huge face lift and instilled a new simpler philosophy, focusing on customer experience.

Now 2 and a half years on they've decided to leave that all behind and start gypsy brewing, nationwide! This is a pretty huge step and clearly one of rapid expansion. It's an interesting step for any brewery, let alone one that has become known for their eccentric range of beers & don't really have a commercial workhorse (Pale Ale, XPA etc.) in their lineup. I reached out to the guys for further comment but they didn't want to take part - which is completely fine, everyone is entitled to engage with me on whatever level they feel comfortable.


I've decided to take on their Vanilla Porter, which clocks in at a surprisingly low 4.3% ABV. As expected there is plenty of vanilla up front with even more chocolate malt flavours following in behind. There is almost no roast character and low bitterness. The mouthfeel is slightly creamy, whilst the body is surprisingly full given the low ABV. Overall; a very impressive example of the style!

Remember it's always Beer O'Clock somewhere in the world!
Posted by Noz at 19:58