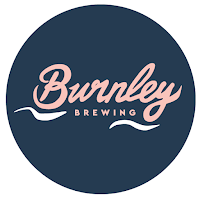 STATS
Two uni mates, Neil Mills & Phil Gijsbers, started Burnley Brewing together in late-2017. It was not their first business venture together, having started a cafe together whilst still in uni. The duo worked in and around the beer scene for a number of years before teaming up with restaurateur Renton Carlyle-Taylor, who'd been running his Italian restaurant, Romulus & Remus, on the site the brewery now sits. 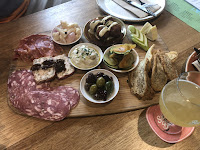 Renton had decided to head in a different direction and when the boys approached him with the idea to stick a brewery in his restaurant he jumped at the chance. The now trio had worked in beer & hospitality for years but had no hands on brewing experience. They hired Head Brewer Michael Stanzel, who'd recently completed 7 years of brewing studies & work in Germany and set about constructing their brewery.

The Bridge Road Brewpub had a custom built 500L system & plenty of fermentation tanks installed, but Burnley didn't stop there. Unlike most start up breweries, Burnley Brewing actually have two breweries. Alongside their Bridge Road taproom brewery they also have a much larger production brewery in Dandenong South - which focuses on producing their main beers for package format.

We're focusing on their Bridge Road Brewpub, which is open to the public. The venue is a large, relatively modern restaurant. It has high ceilings and an entirely glass front. There's some tanks in the window, with more in the back corner of the brewpub. On the right hand side as you walk in are a number of booths, whilst tables take up the middle area in front of the bar. 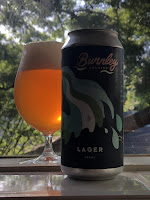 It's a pretty slick looking fitout, with Melbourne grey (apparently that will make sense to some...) & finished light wood throughout. It's definitely more of a restaurant look than your typical brewpub, but it doesn't feel out of place. There's a few bits of greenery scattered around, whilst some fairy lights give a nice ambiance at night. It's one of those rare craft brewery spaces that work just as well during the day as at night, although they are completely different vibes.

There was only ever going to be one choice for which beer was to be reviewed; the Lager. More accurately the Vienna Lager, but that may confuse people if they put it on the can... I feel like this beer get mentioned almost every podcast episode, but I can't find that many references to it on the blog. The style is characterized by the balance been malt and crispness. Burnley's is a wonderful example of the style with toasty & caramel malt flavours pairing with the earthiness and bitterness of the hops.

Remember it's always Beer O'Clock somewhere in the world!
Posted by Noz at 16:23

Email ThisBlogThis!Share to TwitterShare to FacebookShare to Pinterest
Labels: Australia, The Year of Local, Vienna Lager