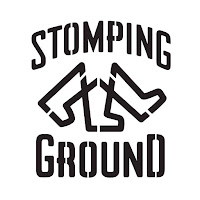 STATS
Stomping Ground is the latest in a line of beer related success stories for owner Steve Jeffares, Guy Greenstone & Justin Joiner, who were destined to own a brewery. The trio are the driving force behind Melbourne institution; The Local Taphouse & the unstoppable juggernaut that is the GABS Beer Festival, which is slowly taking over Australia & now the world, having started at their little bar back in 2011.

They launched their first beer at their own festival in 2015 before Stomping Ground Brewing Co opened the doors to their Collingwood Beer Hall & Brewery in August, 2016. The space on Gipps St, in the heart of industrial Collingwood is unlike any other Australian brewery I've visited!

Stomping Ground combines a high end restaurant, brewery, beer hall, garden & children's play area all in one cohesive space. You walk in the entrance, down a little side street, to what from the outside appears to be a (very) large sawtooth warehouse which has had some windows added.

You're immediately greeted by long communal tables which wouldn't look out of place in a high end restaurant. The middle of the venue is taken up by a huge bar, there's exposed brick, rusted brass fittings and plenty of exposed steel in the roof. Might I add that this bar regularly stocks 30 Stomping Ground beers on tap, in addition to a wide array of spirits and wines - to keep everyone happy.

Step passed the bar and it's almost unthinkable to think you're in the same building. You step up into an inside beer garden, which is on a raised wooden deck. The roof is retractable, which makes for a wonderful spot for a beer or three in summer. It's seems to get greener every time I go to Stomping Ground with plants hanging from every available spot. On the deck there is a children's playground & it's dog friendly - it's a real family affair. 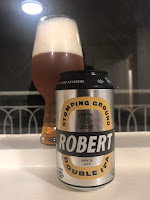 Stomping Ground have one of the better brewery going around. Of course they have pizza, like almost every other brewery around Victoria, but they also strike the balance between mains and sharing plates. The BBQ Chicken Salad with charred Cos Lettuce was absolutely superb!

The first time I had this beer it took me longer that I care to admit to work out the pun in the name of this beer. I thought for ages, why did they name their Imperial IPA Robert? And why did they use the less common acronym DIPA instead of IIPA?

It's named after the one and only Robert "Dipper" DiPierdomenico, former Hawthorn football great & later Channel 7 & 3AW boundary rider. I was just so pleased when I saw they canned this in early May this year. It's a spectacular West Coast Imperial IPA packing citrus and pine flavours alongside big assertive bitterness.

Remember it's always Beer O'Clock somewhere in the world!
Posted by Noz at 05:26