STATS
Warrnambool is not the first place that comes to mind when you think of craft beer in Victoria. It's a town of ~35,000 people located 3 hours West of Melbourne. The Flying Horse Bar & Brewery opened there in July 2008, on the site of The Flying Inn a former service station & caravan park whose name they decided to keep. after being in planning since 2004. This is far earlier than I would've thought given I've never heard of them!

The Flying Horse Bar & Brewery is run by husband & wife team Matthew & Tania Monk. They've been there since the start and overseen a number of changes at the business over time. Initially they had a 10HL FB Propak brewhouse, which has since been moved on & production of their beers moved down to Prickly Moses at Otway Estate.

Probably the most notable thing about The Flying Horse was their dispute with the local council about their pokies licenses, which ended up in VCAT. The brewery won out and the 19 pokies machines went into their venue in early 2013. As far as I'm aware they are the only Victorian brewery to have pokies machines, although I'll know for certain by the end of the year!

Alongside the pokies machines are a TAB & Trackside machines, those fake horse & dog racing games you can bet on. These are all located in the back of the pub, which is very much a large country town hospitality venue. The outside of the building looks quite modern and the fitout is good with different areas having distinct styles. The dining room off to the left as you walk in was decked out in white linen & looked like they were hosting a party in one corner.

It's fair to say the vibe & crowd were both different to any other craft brewery I've been to... The bar is not dissimilar to many you'd find around the country, it's a big wooden clad bar that takes centre stage in the building. However unlike many bars in regional areas alongside the regular macro offerings their were two beer proudly displaying their local heritage; Whale Ale & Dirty Angel. I settled into the Sports Bar, complete with plenty of TV screens and solid large benches, with a Whale Ale to watch the footy. 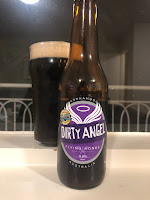 However I'm not going to review Whale Ale, I'm going to review Dirty Angel. It's apparently an English Porter although, if the pub was anything to go by, I'm guessing it's a far different beer to the one that won Champion Porter at the AIBA's in 2009.

I owe The Flying Horse Bar & Brewery an apology. I don't have the BJCP guidelines in front of me, but off the top off my head I think this would tick a lot of boxes. There's lovely, slightly sweet caramel malts up front alongside some darker fruit flavours (I'm thinking red currants). There are some herbal hops in the mix as well, which provide a slightly bitter & dry finish. It's a beer I can actually see myself sessioning. I just hope the Warrnambool locals do too!

Remember it's always Beer O'Clock somewhere in the world!
Posted by Noz at 05:27