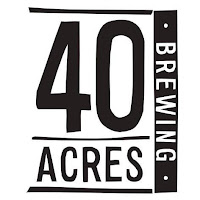 STATS
Trevor Mitchell is much like a number of other brewery owners already detailed on this blog. He had 25 years of home brewing experience and had numerous colleagues & friends compliment his beers over the years. His path to brewing in the Central Victorian Goldfields was a little different to most.

Trevor spent 13 years working on the artillery & guns on the Westralia as part of the Australian Navy. At the conclusion of his service he and his wife Jo packed up their lives to travel the world. They made it as far as China, before settling into a wonderful expat community comprising American's, Canadian & Brits. It was here that Trevor really gained confidence in his brewing after receiving compliments from the Americans - comparing his beer to that available in their homeland.

The duo came home briefly for Jo to give birth to twins, before moving to Vietnam. The family moved around Asia over the next few years, living in Malaysia, Thailand & China. During a short trip home travelling along the Murray River on a cruise, the urge to move home struck. They knew they didn't want a white picket fence in the city, they wanted to give their children an understanding of the real Australia.

But where would they call home? They ended up on a 40 Acre block in Sandon, a Victorian locality about 25km South West of Castlemaine. Sandon's population is only 81! With the majority living on farms larger than 800 Acres - making the Mitchell's block pretty small for the area! Their farm is completely organic & has never seen any pesticides. The Mitchell's operate an off grid farm stay at their property, which is reportedly very popular.

Trevor made the jump to brewing in 2015 - brewing his first beer under the 40 Acres banner, a Session IPA at Brookes Beer in Bendigo. Where possible 40 Acres used hops grown on their own property, in an area not that conducive to hop production. Over time they grew their range of beers to include an Amber Ale, a Porter & a Lager. 40 Acres developed quite a following in Central Victoria, so much so that their beers rarely made it down to Melbourne. 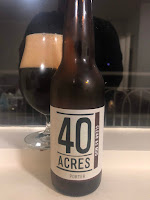 It was announced in late-June 2019 that the 40 Acres Brewing brand had been acquired by Bendigo's Brookes Beer, the facility they'd been brewing at since their inception. The statement said that they will continue to brew Til the Crows Come Home Session IPA & Clear as Mud Porter, both beers that have gained a strong following in Central Victoria.

With that in mind I managed to track down a Clear as Mud Porter. It's an interesting Porter with quite a lot of malt character. There is some caramel & chocolate upfront, before some quite strong roasted coffee notes come through. There is plenty of bitterness from the hops, although any flavour is masked by the roastiness. It's a really enjoyable beer, hopefully that doesn't change under the stewardship of Brookes Beer.

Remember it's always Beer O'Clock somewhere in the world!
Posted by Noz at 06:41