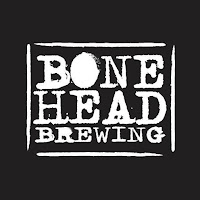 STATS
Bonehead launched in February 2018 on Parsons St, Kensington. Looking at this street, which mixes light commercial warehousing with residential dwellings, you'd have no idea a brewery was here if not for the Bonehead Brewing insignia splashed across the roller door that takes up half it's street frontage.

Anthony Dinotto, who opened Bonehead with business partner Travis Nott, has history with Parsons St, Kensington. His family have owned various businesses on the street since the 1970's & still own the mechanics shop next to the brewery.

This story is similar to so many others, two mates who have been home brewing for the best part of a decade decide they want to step up their game and back brewing their career. They initially planned to call themselves Scoundrel Brewing, before running into IP issues in what they called a "boneheaded move". The name stuck and Bonehead was born.

Their beers are all bear a cartoon character on them, which is a bit irreverent, and is meant to show the laid back nature of the guys behind the brand and how they don't take things too seriously. They their beers seriously however, producing a range diverse range of beers mixing classical & modern styles with some eclectic ingredients (think Maple Syrup & Prickly Pear).

Considering the avant-garde nature of some of their beers, I thought the brewery was a little pedestrian. Don't get me wrong, it's a nice new space but it does feel a little generic. As mentioned earlier, it's a concrete warehouse with a large roller door that is up to allow afternoon sunlight in. There are the industry standard wooden industrial tables with the metal stools, as well as a few higher tables for standing in front of the bar. 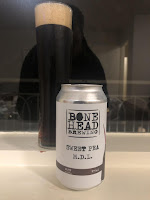 The stainless steel is in the back right corner of the warehouse and you're able to get quite a good look at it as you walk passed most of it on the way to the bathroom, located behind the bar. The bar itself is well stocked, with some local wines & spirits available in addition to the 12 beers on tap.

Continuing with my recent trend of reviewing dark lagers when they're available I'm going to review their Sweet Pea, which they term a Melbourne Dark Lager. It's a sophisticated Dark Lager, there's that initial sweetness that the style demands, some coffee & licorice follow before it finishes with a touch of bitterness. It's a beer that you could easily sit on for a whole session & it's one that I'd highly recommend trying.

Remember it's always Beer O'Clock somewhere in the world!
Posted by Noz at 05:12