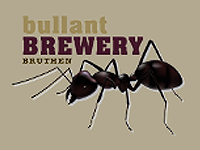 STATS
Bullant Brewery opened in one of the biggest craft beer wastelands in Victoria in 2011. Bruthen is located inland from the better known town of Lakes Entrance, about 3 and a half hours East of Melbourne. Gippsland is a huge expanse of Eastern Victoria, that has been devoid of craft beer options for years. Slowly there are more brands, albeit most without tasting rooms, appearing from the region and this can do doubt be partially attributed to Bullant pioneering the way.

Bruthen has a population of barely 800 people. It would take a bold operator to open a brewery in 2011 in such a small town. That's what husband & wife team, Neil & Lois Triggs, decided to do. They had better knowledge of most on the tourist numbers in the region, having owned Stringybark Cottages located just 5 minutes from Bruthen.

No expense was spared. They built a facility from scratch, which Neil helped design with his architectural drafting skills, & installed a brewery out of Richmond, Virginia that got shuttered due to the GFC. Neil oversees the brewing operations, putting his 20+ years of home brewing experience to good use.

As stated above, the venue was purpose built in 2011. It has a large wooden decking area out the front, which has wonderful views over the nearby Tambo River & grass reserves. The majority of the seating outside is relatively large wooden tables & benches, with plenty of heaters for the colder months. The wood used for the decking and the bar area was sourced locally. The brewery building is iron clad and has plenty of windows at the front showing off the lovely copper brewhouse.

Inside, there is plenty of polished concrete and small tables. For some reason they've gone for these gaudy lime green chairs with metal legs, which I thought made it look more like a cafe than a brewery. The bar area off to your left as you walk in. They have plenty of stock of their range of beers for take away beside the bar, with a large window looking through to that gorgeous copper brewing kit.

From all reports their food is pretty good. There's a diverse range of offerings, from seafood platters, through Korean street food, the obligatory pizza & burgers. Unfortunately the day I visited they were short a chef and were only offering a limited menu. They're an environmentally conscious brewery and source as much of their produce as they can locally, as well as operating almost entirely on solar power. 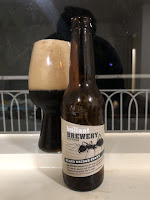 Chair choices can be forgiven if the beer is good, and thankfully it is on the most part. They brew beers that are probably more suited to the time they opened than they are now. They are one of the few Australian breweries that still has a wheat beer in their range!

I've decided to review their Piano Bridge Stout. It's as stout that has changed a lot over the years - with the current iteration clocking in at 6.7% ABV. There is an initial wave of caramel & chocolate malt before bigger flavours of roast & licorice take over. There is some hop bitterness at the backend - although there is next to no hop flavour. Overall, it's an enjoyable relatively easy drinking stout.

Remember it's always Beer O'Clock somewhere in the world!
Posted by Noz at 06:35

Email ThisBlogThis!Share to TwitterShare to FacebookShare to Pinterest
Labels: Australia, Export Stout, The Year of Local