STATS
Exit Brewing announced themselves to the Victorian public with their first release in 2014. Unlike the multitude of breweries launching at the time with safe offerings such as Pale Ales, the boys went big and released a 6.2% Saison utilizing the most polarizing of hops; Sorachi Ace. I know I wasn't the only one who was impressed with the ballsyness - it's amazing to think how far the industry has come in the last five years as people would be intrigued but not surprised now.

Exit was formed by Fraser Rettie & Craig Knight, better known as Frase & Grum around the traps. The duo met in 2000 working in IT, before spending a decade working on various IT projects in Europe. It was during this time away that their brewing ideology was heavily influenced - hence a Belgian Saison first up... It also spawned their brewery name ex-IT.

At this time Exit were brewing their beers out at Cavalier, the brewery that has helped launch so many breweries. They owned a solitary fermenter at Cavalier and so proceeded to focus on single releases, whilst sourcing their own space. That didn't take terribly long however, as their mates at Kaiju offered them to join their project in Dandenong South in late-2015.

With a space to call their own Exit began devising their core range, which was a little bit left of centre. No Pale Ale (one was added in 2017), a West Coast IPA, Amber Ale, Milk Stout & of course a Saison.Unlike their stable mate, Kaiju, Exit have a taproom where they showcase their beers. Unlike most Australian brewers, that taproom isn't at their brewery; but on trendy Bridge Road in Richmond. Their bar is called Uitgang, Flemish for "exit", which is another nod to the country that inspired the now ex-IT duo. 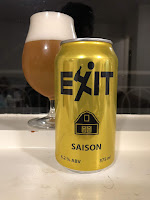 Uitgang is a great bar to watch the footy in of a weekend afternoon. There's plenty of exposed brick accompanying plenty of tables inside, whilst there is a nice beer garden out the back. It's dog friendly, kid friendly and there's a stack of board games at the front. Their taps showcase their own beers alongside at least one Kaiju offering as well as a host of their friends' beers. It's also always worth checking out what goodies are stashed in their fridges...

I really couldn't review anything else; it had to be the Saison. It really is a superb Saison. The malt is slightly on the sweet side, which lays a platform for the yeast to shine. It's got good peppery notes, alongside some hay & green apple. It's got the right, slightly higher than usual, level of carbonation for the style, there's some lemon/lime notes from the Sorachi Ace & it finishes quite dry. It's right up there in the conversation for best Australian Saison.