STATS
The story of Fixation Brewing Company is inextricably linked with their founder; Tom Delmont. Tom Delmont is one of the best known characters in the Melbourne beer scene. For years Tom was associated with Mountain Goat, as one of their lead Goat on the Road. So beloved was Tom by the team that he was immortalized in a beer; The Delmont, a 7% West Coast IPA that was the second installment in their "In-Breed" series

Tom's love of IPA's was formed on a beer trip to the USA in 2010, at that time there were very few West Coast style IPA's brewed in Australia. He'd been working for Mountain Goat for 3 years at this point & was completely immersed in the world of independent craft beer.

Fast forward 5 years and Tom found himself up in Byron Bay on a family holiday. He wandered into Stone & Wood to pickup some takeaways & in somehow ended up in the offices talking to the founders about life & beer. 2 weeks later he took the call from Mountain Goat informing him that they were going to accept an offer from Asahi.

Loving independent craft beer and not wanting to work for a multinational, Tom thought back to that conversation he'd had with the Stone & Wood founders. They'd mentioned the possibility of an IPA-only offshoot from Stone & Wood, as an IPA didn't really fit with the Stone & Wood brand. Some calls were made and Fixation Brewing was born with the sole objective of producing IPA's.

Within 3 months of Mountain Goat's sale, Fixation IPA, a beer that regular readers of this blog would be more than aware of, hit the market! To say the beer was a success would be to do it a disservice. The beer blew up, particularly in inner Melbourne where you can now find it on tap at most pubs in the Fitzroy/Collingwood area. More IPA's were added over time, but it seemed like something was missing...

After a long search for the right venue, which took in sites from North Melbourne, to South Yarra to Fitzroy, The Incubator opened in September 2018 in the heart of Collingwood, an area that had become more synonymous with the brand that it's Byron Bay production facility. There was no debate for me about including Fixation in the list of Victorian breweries/brewers; all their beers bar their eponymous flagship IPA & Obsession Session IPA are now brewed on The Incubator's brewhouse.

If you love IPA's The Incubator is a must visit. There are all manner of IPA's on offer, with Sour IPA's, Hazy IPA's, NEIPA's, Black IPA's, Rye IPA's all in the rotation. The brewery is decked out with hop motifs, from the murals on the wall to the tasting paddles in the iconic shape of the hop. There's a lot more stainless in the brewery now than when they opened a year or so ago - with fermenters now on either side of the central bar.

They've done so well with what used to be a derelict warehouse on Smith St that had been vacant for years. It's amazing what a fresh paint job and floor to ceiling windows will do to a space. Most of those windows also face North, which is a blessing few breweries in Melbourne can count. The natural light in the brewery makes it seem very inviting & really dispels those people who think breweries are dark & dingy... 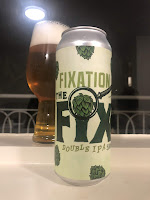 Inside the space is nice and open with an array of metal tables and wood topped stools. The bar top is more of the same metal, whilst the beer is served from a wood lined cool room, complete with white tiles & taps. There's a lot of greenery found throughout the brewery, which contrast nicely with the industrial light fittings and exposed metal that has been added to the skylight heavy roof.

After much consideration I've decided to talk about The Fix. It's their seasonal Double IPA & it's big & was released in cans for the first time earlier this year! The pours beautifully golden & clear, just how I like my IIPA's. It's dry hopped with Simcoe, Citra & Mosaic and packs the huge tropical fruit aromas that you'd expect as well as rounded, but assertive, bitterness.

Remember it's always Beer O'Clock somewhere in the world!
Posted by Noz at 06:05