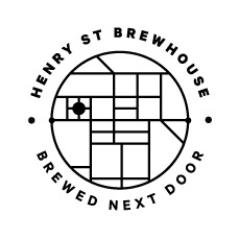 STATS
Henry St Brewhouse is a brewery that very few in Melbourne would've heard of. It's tucked away in a little factory in the industrial part of Kensington that most people drive through and never stop. Interestingly, Henry St Brewhouse isn't on Henry St. The Brewhouse is named after Phil's house on nearby Henry St, which is where they started brewing. 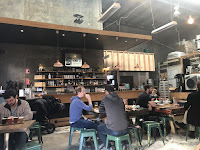 Some of you may be aware of them through our earlier The Year of Local post on Inner North Brewing, who's owner Zack Skerritt initially started Henry St Brewhouse with Phil Quayle. The duo used to be coworkers and began homebrewing together in 2010. In 2015 they opened Henry St, at which time Zack left his job to brew fulltime. It obviously didn't work out the way he'd planned...

Phil is still there and is operating one of the smallest brewing kits in the country, his handmade 100L system ''Blue Billy the Rainmaker"! It's not only the kit that is small at Henry St Brewhouse; everything is! And it has to be, the venue is one of the smallest breweries I've been to. There's room for maybe 30 people inside, and that'd be tight, with a small courtyard that could hold another 10 or so out the front.

Just like the brewing kit, everything at Henry St seems to be handmade. From tables made out of pallets, to plywood benches around the walls of the warehouse, to the cool room that is stacked high with all manner of brewing equipment and ingredients. There's a little wood fired stove, which pumps out some serious heat as well as some really cool industrial light fittings. There are these quite nice looking cooper light fittings above the bar, which look a little out of place in a space that otherwise looks like a work in progress (which I mean in the nicest way possible)! 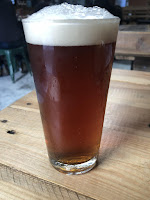 In a venue this small you should be able to work out where the bar is (it's on your left as you walk in). They have an array of spirits, wine & soft drink for the non-beer drinkers in your life and are kid & dog friendly. While they don't do food, they do offer packets of chips & allow you to order your own food from their neighbours.

I had a couple of quite nice beers at Henry St, however I'm going to write about the Hop Harvest Ale briefly. This is brewed with hops that Phil grows himself up in Taggerty, on the edge of the Victorian High Country. It's a English IPA - brewed with Wet Hops - that balances malt and hops really nicely, whilst retaining that green wet hop character that I enjoy. Definitely go down and check out Henry St, they are making some really nice beers in a space that has to be seen to be believed.

Remember it's always Beer O'Clock somewhere in the world!
Posted by Noz at 22:59

Email ThisBlogThis!Share to TwitterShare to FacebookShare to Pinterest
Labels: Australia, English IPA, The Year of Local