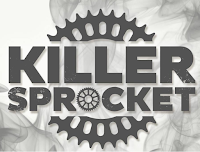 STATS
Killer Sprocket launched in 2012 as a contract brewing operation. This was in a time where contract/gypsy brewing was far less accepted than it is today. It's a story like many already covered, the company was started by husband & wife team Sean & Andrea Ryan, who had been home brewing for years before launching their own label.

It's on this home brew system that Sean & Andrea develop their recipes that are eventually scaled up to full on commercial releases. Their recipes are often slightly left of centre, I distinctly remember their "Peated Pale Ale" - a pretty heavily smoked beer - as their second release! They also have a Pale Ale in their range, which uses Juniper berries to impart bitterness.

This eclectic nature of their beers comes about, in part, due to the relatively mundane nature of the day jobs of the duo. Sean has a business degree & in work force management, whilst moonlighting as a comedian & podcaster. His wife Andrea is a medical doctor, which probably paid a role in a bank financing a contract brewery back in 2012! They will have been back to the bank in recent times, as they're building a brewery out in Bayswater, which they're planning to have open in September.

The brewery name is derived from a similarly mundane job. Sean used to work for a large insurance company & found out that databases need to be registered with ASIC & other regulatory bodies when they reach a certain size. Normally these databases bear incredibly bland, relatively instructional names. An impulse came over his to create a database with a silly name, that would eventually need to be registered. Hence, The Killer Sprocket Database came into existence. 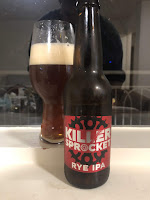 When naming their brand they found that most of their initial choices were already taken and so, much like in naming the original database, on a whim they became Killer Sprocket. The on a whim theme continued with my choice of beer for this review...

The beer that won out is their Rye IPA. It's a beer that I hadn't had before, something which surprised me as I love rye! It's a good thing I did, as this beer packs a huge punch of that spicy rye character. It's almost, keyword being almost, too much! There is good bitterness from the hops, which are adding some earthy/spicy notes as well as some punchy citrus. It's a beer I could definitely see myself buying more of.

Remember it's always Beer O'Clock somewhere in the world!
Posted by Noz at 23:27