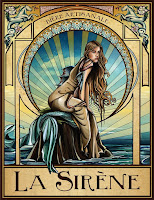 STATS
I remember the hype that followed La Sirene when their beers first hit the market in 2011. At first it almost seemed like a myth, there were supposedly these guys brewing farmhouse beers up in the high country & their beers were particularly hard to track down, but oh so worth it if you could!

Those guys were James Brown & Costa Nikias & in 2011 they were juggling other commitments (James studying wine making & Costa working in brewing consultancy) and sporadically brewing Saison at the Jamieson Brewery (which became Wrong Side eventually). With every sporadic brew the hype increased and so did the clamour for more La Sirene beers!

In 2013 Costa decided it was time to fold to the peoples wishes and make more beer. James couldn't commit to the increased time requirements and left the business to be replaced by Costa's wife Eva. They secured an old warehouse in Alphington and set about installing their "Urban Farmhouse Brewery".

Since installing their brewery La Sirene have slowly expanded their offerings, still entirely within the farmhouse realm. Praline was the beer that put them on the map of most craft beer drinkers. It's a Belgian Strong Dark Ale with heaps hazelnuts that took out People's Choice at GABS 2014. It's also the beer that really kick started the push from La Sirene into less traditional farmhouse beers. Their label artwork also helps them stand out from the pack. 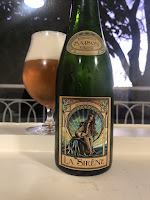 Interestingly they've bucked the trend and haven't opened a brewery tap room. I'd love to know the thinking behind it - La Sirene have a brand and a brewing philosophy that would really benefit from explaining it to new consumers. Maybe they're happy with the number of consumers they already have. In any case - I'll keep drinking their beer whilst they keep producing it!

I've decided to review their straight Saison. It's a superb beer and one I don't drink anywhere near enough! The malts are slightly sweet but this is offset by the peppery spiciness that you'd expect in a good Saison. There is also some hay, barnyard funk & hints of raw alcohol (in a good way). It finishes beautifully dry and is a beer that I always hope to have at least one of in the fridge.

Remember it's always Beer O'Clock somewhere in the world!
Posted by Noz at 06:19