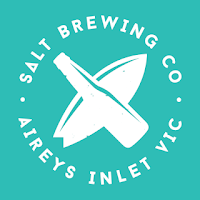 STATS
Salt Brewing Company has an interesting history. The idea was first conceived in 2011 when a group of 8 locals, led by Tim Wood & Phillip Johnson, bought the only pub in their town after it went out of business. They eschewed the usual route of CUB installing their taps and the subsequent tap contracts that follow, and instead installed their own having baulked at the idea of Australian beer being foreign owned.

They became a pub known for stocking independent Australian owned beer, such as Little Creatures & Mountain Goat. However, when Little Creatures was sold & with constant rumours surrounding Mountain Goat - the group decided to install their own brewery and maintain independence. Thus Rogue Wave Brewing Company was formed, with their first beers pouring in 2015.

"Rogue Wave Brewing? I thought they were Salt Brewing..." You would be right. They only became Salt Brewing at the end of 2018, having traded as Rogue Wave for their initial 3 and a half years. With the reason given that it was too hard to continually spell rogue for people. The brewery is fully solar powered, highly environmentally conscious & donates its spent grain to the local saddlery.

A lot of this has to do with their location. Salt Brewing Co, formerly known as Rogue Wave Brewing, proudly stands in the iconic Airey's Pub in Airey's Inlet, a town about 50 minutes South West of Geelong on The Great Ocean Road. It's your typical country beach-side pub, although it's a reasonable hike down the hill to the beach from the pub, complete with weathered timber exterior, outdoor furniture and a tin roof.

Inside the fit out is really nice, whilst not straying too far from the beach side feel. There's a large stone fire place in the middle of the main room, that I can't help but feel would be needed on cold winters nights down by the coast. There's plenty of the usual brewery wooden tables with metal stools around, whilst there is a nice nook back around the corner from where you walk in with a pool table and seating around the windows. 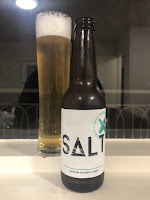 The food menu is better than your average pub, with the usual pub staples and pizzas joined by some pretty extravagant mains utilising local produce and fresh seafood. I only had some chips having eaten not that long before arriving, but they were well done and the food being served around me looked great and seemed to be going down well.

I've decided to review the eponymous Salt. It was a toss up between that and Moby, their Pale Ale from which 10% of sales is donated to the Sea Shepherd. Salt is a really clean lager, which has moderate sweetness and nice grassy bitterness. This is exactly the sort of beer I'd want after being in the surf for a few hours. It's seriously refreshing and one you just want to drink more of!

Remember it's always Beer O'Clock somewhere in the world!
Posted by Noz at 18:19