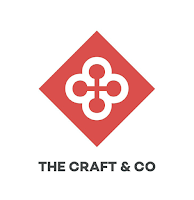 STATS
The Craft & Co opened in December 2015 on Smith St in Collingwood. Their first beers launched not long after, although to simply call The Craft & Co a brewery would be to do disservice to what is one of the most well rounded & focused small producers in Victoria, if not Australia. They place a huge emphasis on quality local produce, with anything they can't make themselves being sourced from as close as possible. 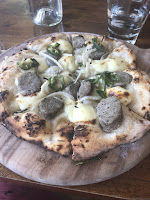 The Craft & Co produce a whole range of products alongside their beers. They have an operating still & produce a number of different spirits. They make their own cheese & small goods, as well as offering classes on how to do this yourself. In addition to all of the above, and probably something else I've forgotten, they also operate a restaurant on site.

As is becoming more apparent as more Gypsy/Contract operations are added to The Year of Local directory; The Craft & Co are becoming one of the leading venues for new startup breweries to get their beer brewed at, through their Gypsy Hub brand.

The venue is, understandably given the variety of things they do, a bit of a mismatch. The floor is polished concrete with industrial tables, which are well spaced out, scattered around in various sizes. There's a large, white tiled deli section directly in front of you, whilst the bar, also white tiled, is over to your left. When standing at the bar directly behind you is their functioning still - which they somehow got a license to use right at the front of the building, next to the street front. It really is a venue that my words won't do justice to - you have to see it for yourself! 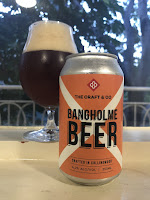 They have a really diverse menu, that changes regularly and showcases what's fresh & local. I had a sausage & fennel pizza with jalapeno's the day I was there, which was really impressive. I'd actually quite like to go back to see what some of the bigger plates are like.

For the beer I've gone with their Bangholme Beer. It's ostensibly an English Bitter, despite them, strangely, proclaiming it as a Table Beer. There's some sweet biscuit note initially alongside an avalanche of caramel malt flavours. The hops are punchy and typically English, with earthy & herbal characteristics.

Remember it's always Beer O'Clock somewhere in the world!
Posted by Noz at 03:36

Email ThisBlogThis!Share to TwitterShare to FacebookShare to Pinterest
Labels: Australia, English Bitter, The Year of Local