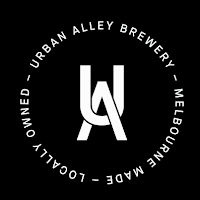 STATS
The brewing industry in Australia is predominantly made up of white males (with a large number of them sporting beards). In recent years there has been a steady influx of females to the industry, at all levels from brewery owner to tap room staff to head brewer. What we're yet to really see is an influx of people from different backgrounds - there are a few spotted about but not in any significant number.

Urban Alley is one of the breweries pushing diversity. The brewery was established by a number of people from the large local Jewish community. The history of the brewery is as unique as the space they currently call home, located in The District Docklands, directly under the Melbourne Star Observation Wheel.

What would eventually become Urban Alley was founded by Ze'ev Meltzer in 2016. It was a contract brewing operation called Collins Street Brewing Company. For those not familiar with the geography of the Melbourne CBD, Collins St is the cities most prestigious address and where you will find the cities highest real estate prices.

They launched with a Golden Ale called Once Bitter Urban Ale. From memory it was actually a pretty enjoyable beer, that ended up on tap in a number of bars around the city. The plan was to secure a space on Collins St and open a brewery, however this proved impossible logistically. They changed tack & ended up securing the lease to the old Harbour Town Hotel in 2017, as part of the revamp of Docklands, & began setting up a brewery that would be able to entice the tourists visiting the Melbourne Star.

The venue that they launched with in the second half of 2018 is massive! They've got seating for approximately 500 patrons in a very slick looking brewery. There's a large decking area out the front, all of 20m from the entrance to the Melbourne Star. It's an area full of timber and metal tables of different sizes, with plenty of heaters alongside a large brick fire place.

Inside, there's a lot of different textures going on. The tables are the same as outside, the floor is polished concrete, the bottom of the bar is exposed brick, the top of the bar is a darker wood, there's white tiles/painted bricks, there's distressed timber & there are huge windows through to the massive wall of  stainless steel. Despite all those textures, the space actually looks pretty clean, see the image above.

Earlier in the piece I was lamenting the lack of diversity in the Australian craft beer scene. Head-brewer Shaya Rubinstein has an extremely diverse background. He was born in Baltimore to Jewish parents, before being raised in Brooklyn. He spent years in the Israeli, before marrying, moving to Australia & beginning home brewing.

He met Ze'ev through the local Jewish community & when the time came to open Urban Alley he landed the job as Head-brewer. Despite having no commercial brewing experience they hand Shaya the keys to a 25hL brewhouse, capable of putting out over a million litres of beer a year! Their range of beers includes a beer based off that original Once Bitter Urban Ale; fittingly now known as just Urban Ale, alongside an English Brown, a Pale Ale & a Lager. They also brew a number of interesting limited releases. 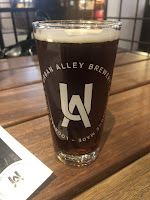 The food menu is pretty diverse, there's the brewery standard pizza alongside a good pub menu that also features a steak section. It's a menu that everyone should be able to find something they like on, something that fits with their location To provide something for their community, they operate a Kosher kitchen inside their regular kitchen that operates 3 days a week (currently Wednesday, Thursday, Sunday).

It's a little weird for a brewery to launch with a Brown Ale in their range these days. That's what Urban Alley have done. The beer is really quite a good example of the style that I've now been lucky enough to try both on tap & in cans. There is good chocolate & caramel malt flavours, a touch of roast, complimented by some earthy & herbal hop notes that also provide nice bitterness. It's one of the rare darker beers that I could quite happily sit on for 4+ pints over an afternoon.

Remember it's always Beer O'Clock somewhere in the world!
Posted by Noz at 22:55