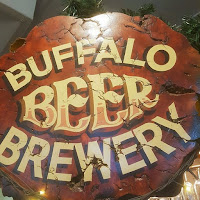 STATS
Buffalo Brewery is located in Boorhaman, a locality 15 minutes from Wangaratta in Victoria's High Country. One would think that this brewery isn't hugely significant in the history of Victorian beer, but you'd be wrong! The Buffalo Brewery is the oldest currently operating brewery in Australia, having opened in 1902 (the year before Carlton United in Melbourne)!

The brewery doubles as the Boorhaman Hotel. Husband and wife team Greg & Leanne Fanning run the brewery & pub with help from their daughter Tia as they have done for almost 20 years. It's your typical, really small town country pub. It's very long & narrow, with a veranda out the front & a summer beer garden.

They pump out their beers in 180L batches, in a space smaller than most homebrewers would operate in! I haven't been able to conclusively prove this either way, but depending on which literature you read; Victoria Bitter, the now famous Australian lager, was supposedly first brewed at the Buffalo Brewery in the early 20th Century. I believe it's the closest thing to the recipe they use now as the Victoria Brewery, which later became part of CUB, produced Victoria Bitter Ale in the 19th Century.

Their lounge area is quite cosy. There's a 360 degree fire place in the centre of the room, which was providing serious heat! It's got a number of tables of various sizes with heavy duty plastic chairs - a bit of a staff canteen sort of vibe, but in an old wood lined bar. There's a piano in the corner, with some bottles containing some different malts, and right next door is a red velvet chez... It's a slightly odd space, but it works! 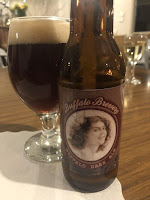 The menu was really impressive! I was slightly surprised by the amount of seafood on the menu, considering they're a long way inland. I opted for a schnitzel with gravy - always tough to turn down! On the day we visited they were having a few issues with their draught systems - some beers were undercarbed, some massively overcarbed,

I ended up with a partly frozen bottle of their Dark Ale - so it definitely wasn't in the best condition it could've been. There was some chocolate & molasses, but it was offset by a weird herbal quality & something that I initially thought was a chlorine issue with their water. I'd like to try the beer in better condition one day - but I have to work with what I've got for now...

Remember it's always Beer O'Clock somewhere in the world!
Posted by Noz at 07:21