STATS
Byramine Homestead & Brewery is one of the stranger breweries I've visited. It's located the best part of a kilometer down a dirt track surrounded by vegetable fields off the Murray Valley Highway about halfway between Yarrawonga & Cobram. The property came into the possession of Wade & Nicole McPherson in 2010 with the brewery being established in 2013. 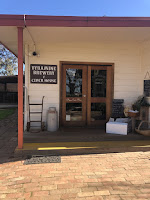 The Homestead was founded in 1842 & is the oldest still surviving home in regional Victoria. The home was built for Elizabeth Hume by the famous explorer Hamilton Hume, her brother in-law, after her husband John was killed by Bushrangers. She was pregnant with her 9th child at the time of her husband's death.

Nicole's family own the Kelly Bros vegetable farm, which is the largest vegetable farm in Victoria &, strangely, surrounds the Byramine Homestead. After Wade suffered a serious injury in 2006, Wade & Nicole moved to the country for a sea change. They acquired the homestead in 2010 and have been making it their own since. 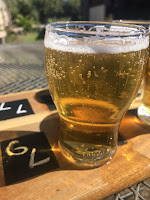 The brewery is housed in a typical Australian farm house. There's a bit of a country bakery feel when you enter the main room, which is only offset by the bar in the middle of the room. Outside, where most patrons were enjoying the warm late winter sun, was complete with a range of different outdoor furniture from wooden all-in-ones to metal tables and chairs. The setting is quite idyllic, sitting in a garden amongst vegetable gardens, which provide the majority of the produce for the food they produce.

This brings us to the beer... It wasn't great. We tried a cider that was really refreshing as well as a really impressive Ginger Beer. Of the real beers, the Kellerbier was the pick of the bunch. It's called Kelpie's Curse and it had a nice malt body with some floral & grassy aromatics. There was a touch of green apple, which I'm assuming was acetaldehyde - a fault you very rarely see these days.

Remember it's always Beer O'Clock somewhere in the world!
Posted by Noz at 03:58

Email ThisBlogThis!Share to TwitterShare to FacebookShare to Pinterest
Labels: Australia, Kellerbier, The Year of Local