STATS
Mountain Goat was launched in 1997 by two friends, Dave Bonighton & Cam Hines. The duo had spent time studying and working overseas, where they had discovered full flavoured beer independently. Upon returning to Australia they were disappointed with a market dominated by macro lager & set about trying to change that. They are the true pioneers of the craft brewing scene in Melbourne, which barely 20 years later is one of the most vibrant in the world.

A lot has changed about Mountain Goat in the 22 years since they brewed their first batch of Hightail Ale in the Scottish Chiefs Hotel in Geelong. After two years splitting their time between the aforementioned pub and the Grand Ridge Brewery in Mirboo North (note: these are not close!), the duo had cobbled together enough money, with the help of family & friends, to start their own brewery.

They opened in Crown St, Richmond in 1999 & decided to open the brewery up for locals to drink in once a month. It was a decision that proved to be a masterstroke for cash flow, with people lining up out the door to get in. One of the strangest things about my long craft beer journey is that until last month, I'd never been to Mountain Goat! This Melbourne institution, in my area, and I can't explain why I'd never visited.

2004 saw them move to a larger warehouse on North St, one street over from their previous site. Something I didn't know until writing this piece is that it took them until 2005 to get an automatic bottling line, until then they'd hand capped & labelled over 2 million stubbies of beer! Mountain Goat was available nationwide & the Richmond brewery couldn't keep up with demand. First the William Bull Brewery in Griffith began contract brewing some Mountain Goat beers, before all Steam Ale production, as well as packaged products, was moved to the Asahi brewery in Laverton in 2011. 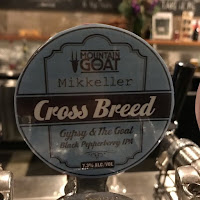 This was the start of a productive relationship between Mountain Goat & Asahi, which eventually saw them buy out Mountain Goat in 2015. Whilst there was the inevitable backlash from elements of the craft beer community, the majority was supportive of the move that allowed a group of family & friends to see a massive return on the money they put in almost 20 years ago.

Very little changed at the operation, the Richmond brewery still opens on Wednesdays & Fridays, limited releases are still brewed in Richmond, whilst Steam Ale is still brewed at Laverton. The beer is still excellent and Dave's still around (Cam left in late-2017 to focus on other opportunities).

The brewery is in a large brick warehouse, in a quiet street in industrial Richmond. It's directly across from another craft beer institution in Melbourne, The Royston Hotel. You wouldn't be able to pick the brewery from the other warehouses if not for the small, aging sign above the roller door, featuring the brewery's goat head insignia. 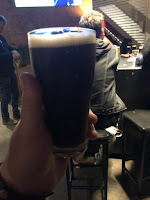 Inside you're greeted to a large, high ceiling space. To your left is a long bar serving up a variety of core, limited releases & brewery specific Mountain Goat beers. Above the bar is the offices where the admin staff work, famously adorned with Mountain Goat slab boxes. You have good views of masses of stainless steel from almost anywhere in the brewery tap room, where you can enjoy a wide array of pizzas that are reportedly excellent!

The beer was always going to be a limited release & I could think of nothing better than to select their re-brew of Gypsy & The Goat for their GBW event. I voted for this beer from 2012 to come back at the Gala & I'm so happy it did! It's a Black IPA, originally brewed with famous gypsy brewer Mikkeller, which had a heap of pepperberries added. It's roasty, slightly spicy, has generous bitterness & a fruitiness, assumably, from the pepperberries.

Remember it's always Beer O'Clock somewhere in the world!
Posted by Noz at 21:24