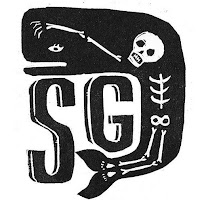 STATS
Husband & wife team, Chris & Gab Moore, launched Sailors Grave in the East Gippsland town of Orbost in the second half 2016. The duo had previously started famous Sydney restaurant The Commons before selling up and moving back to Gab's home town, with their two young children, which is about 4 and a half hours east of Melbourne.

They setup shop in the town's historic Butter & Produce Factory, which traces its roots back to 1893. Yet despite that historic venue Sailors Grave are unique in that they are a regional brewery, that doesn't have a tap room. At least yet! Chris & Gab have grand plans to build the brewery into a destination in Orbost, complete with taproom, restaurant & accommodation. It's part of their grand plan in playing a part in the rejuvenation of Orbost & the wider East Gippsland area. 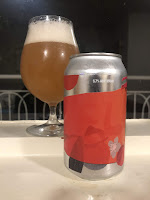 They've developed a reputation for brewing unique beers, particularly using local produce from their East Gippsland locale. Whether that be flowers fossicked from the side of the road, sea urchins from the nearby ocean or local in-season fruit from their neighbours. Sailors Grave aren't afraid to throw anything into their beers & the oft-weird, but always delicious results have earnt them a loyal following.

I've gone with a very Sailors Grave beer; Fields V2. It's a Hazy Hoppy Farmhouse beer that has had rhubarb & white nectarines added to it. It's a cool beer. There's good sweetness from the nectarines, which is complimented by tropical notes from the hops & the yeast. There's an interesting savoury component from the rhubarb, which really works well with the other flavours.

Remember it's always Beer O'Clock somewhere in the world!
Posted by Noz at 05:14

Email ThisBlogThis!Share to TwitterShare to FacebookShare to Pinterest
Labels: Australia, Fruit Beer, The Year of Local