STATS
It's not that long ago that I was lamenting the lack of diversity in the craft brewing scene, not only in Victoria but, worldwide. That is slowly changing. One of Melbourne's newest brewery's; Two Rupees Brewing Co, is one such brewery championing diversity. It was started by two Sri Lankan guys, Amila Mendis & Danny Perera, & opened in July 2019.

Melbourne has a large Sri Lankan population, however I don't think I've come across any in craft beer circles before. I visited their new brewery the week after they opened & spent the best part of an hour talking to the two about their journey - which sounded so similar to my own. They got into craft beer, loved it, progressed to visiting breweries regularly, progressed to home brewing, progressed to opening their own brewery!

Their venue is one of the smallest I've visited. It's housed in a small brick warehouse, on a street that looks like it should have a brewery on it. It's located in Clayton, just around the corner from Monash University, about 20km SE of the Melbourne CBD. Inside the walls are painted white bricks, the brewery is at the back and takes up approximately half the depth of the space. There are tables with the ubiquitous brewery stools, plants dotted about and invisible shelves showing off the range of spirits they offer alongside their beers. 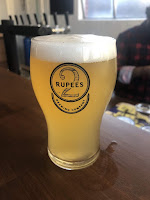 Two Rupees is so small that it's currently only licensed for 20 people! They hope to have a footpath permit in place in time for summer, which should double the licensed capacity! The brewery has snacks that you can purchase as well as allowing drinkers to order in their own Uber Eats/other food delivery services.

I sampled each of the 4 beers on offer, all of which are well made and sessionable. I've decided to review the Witbier. The guys, influenced by their homeland, have added cumin alongside the traditional coriander seeds used in the style. The resulting beer packs really good depth of flavour, yet retains the drinkability of the style. Honestly, I could quite happily have stayed there all day drinking this beer - it's an excellent first up offering!

Remember it's always Beer O'Clock somewhere in the world!
Posted by Noz at 23:54

Email ThisBlogThis!Share to TwitterShare to FacebookShare to Pinterest
Labels: Australia, The Year of Local, Witbier