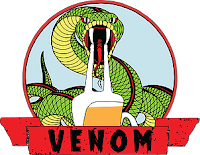 STATS
Venom was launched in 2015 by Joel Drysdale, a man who's been around the Victorian craft beer scene in various guises for years. They've got one of the most eye catching logos in the business; people don't always know Venom, but show them the logo and they know whether they've had the beers or not!

The Venom story is one that could've gone oh so wrong. You see Joel's dad John, who also helps out with the business, got bitten by a snake in his Mansfield garden. The story goes that whilst he waited for his wife to get home he cracked a beer from the fridge. Joel couldn't bear the thought of his old man going out drinking a macro lager & hence Venom was born.

Venom's beers have been brewed at Hawkers since day 1. Whilst they have dreams to one day own their own brewery, those days are still a fair way down the track. Venom have got their own space however, with John & wife Heather taking over the Country Club Hotel in Yea, which had burnt down in 2015. The doors opened in July 2017 on the rebuilt pub, that had been an institution in Yea since 1858. They've kept some of the old charm whilst giving it a modern twist. 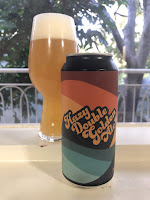 I was really intrigued when I saw Venom was releasing an Imperial NEIPA in collaboration with Carwyn Cellars. Hazy Double Golden Ale was the name & it clocked in at bang on 8% ABV. It was also the best Australian example I've had of a NEIPA to date!

There was no astringency, which characterize so many Australian attempts, it was lusciously juicy and had that silky mouthfeel that you get in the best American examples. I didn't know these guys had this in them! Definitely keep an eye out as they're planning on releasing more limited releases to compliment their core range.

Remember it's always Beer O'Clock somewhere in the world!
Posted by Noz at 21:42