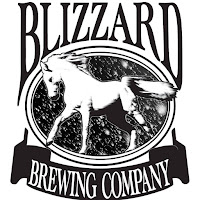 STATS
Blizzard Brewing Company is the highest brewery in Australia, sitting in a typical ski fields building on top of Dinner Plain at 1550m. It was setup by an American, Mark Hubbard, who was working in tourism in the ski fields and thought that the only thing the region was missing was a brewery. 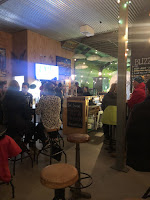 It proved harder to achieve than he could possibly have imagined! In the middle of 2015 Mark secured the site that the brewery now sits on in Dinner Plain & ordered his brewing kit from San Diego & China. Everyone starting a brewery in Australia is aware of the freight costs involved in acquiring brewing equipment, but no one could expect the last leg of the journey, once the equipment had landed in Australia, would be the most expensive!

That's just one of the challenges of being located at one of the highest points in Victoria. Lizzie, Jimmy & I, braved the same journey up Mount Hotham & managed to fit Blizzard into our High Country weekend without having to sacrifice any breweries! And I'm so glad we did!

The tap room & brewery is lined with plywood plastered with Blizzard posters and artwork from a local artist. The bar is directly in front as you walk in, it's an L-shaped bar with a large chalkboard above the bar displaying what's on offer. The stainless is right out the back of the brewery & is a little shielded from view if you're sitting in the front. There's a lot of high tables in front of the bar, with most of the stools made from converted Singer parts, whilst there are also a couple of areas with couches, quite reminiscent of a living room.

Probably the most unique aspect of the brewery is the number of dogs inside the brewery, including our own Jimmy. Most breweries have an outdoor area where you can sit with your dog, however there aren't that many where they can come inside with you! 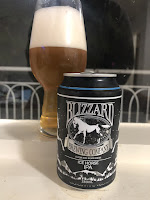 Blizzard Brewing is one of those rare places - I'm guessing it has something to do with the negative temperatures just outside the brewery walls. Once you step inside, you'd have no idea how cold it was outside, as long as you can look past all the people wearing ski gear...

I've decided to review Ice Horse, their 5% American IPA. Normally I think of IPA's having more ABV than this one, but I don't really mind if the beer tastes good. And the beer does taste good! It packs a really good whack of bitterness, with tropical fruit & pine notes from the hops. It's a beer that I'd quite happily have a session on - there's enough hop character to keep it interesting, but it's not overpowering.

Remember it's always Beer O'Clock somewhere in the world!
Posted by Noz at 21:38